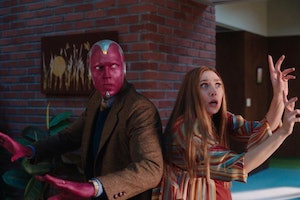 Just like the dearly-departed Pietro, WandaVision is speeding through its source material. Though only on its fourth episode, the tone has shifted from idyllic early 1960s suburbia to the wild 1980s. However, episode 4 may not dwell in Westview for long. A new trailer posted by Marvel on Thursday reveals what's been happening on the other side of the TV screen — and it seems to be exactly what fans have been hoping for.

Here are five huge reveals from the new clip.

Though it's no surprise for anyone with a cursory knowledge of IMDb, the trailer confirms Teyonah Parris's character is actually Monica Rambeau, and she's a captain! While to Wanda she's known only as "Geraldine," Monica is shown as a child, the daughter of Maria Rambeau in Captain Marvel. With December's news that Parris will return for Captain Marvel 2, this isn't a huge shock, but it means we'll know more about her mysterious connections with S.W.O.R.D. in a matter of hours.

Randall Park as Jimmy Woo was already a cameo many saw coming, but this trailer revealed he's already made his WandaVision debut. Back in episode 2, Wanda experienced a strange glitch where a man's voice called to her through a radio. In this new trailer, we see the other side of that call, given by Jimmy Woo on what looks like a retro transmitter. Episode 4 will definitely dwell on these two just as much as the titular Vision couple.

Also donning some vintage gear is Darcy Lewis from all the way back in Thor. Kat Dennings dons a beanie once again to play Jane Foster's sardonic intern, now apparently making a name for herself as a member of S.W.O.R.D. Eagle-eyed fans will notice that Lewis has already made her series debut as well — as the hand that turns off the TV set in the final shot of the pilot. Has she turned her encounter with an Avenger into a lucrative career investigating other "anomalies?"

The main focus of this trailer is Monica encountering some sort of energy barrier that gives off multicolored TV static when touched. This key scene exposes the setting of the next episode. While Wanda and Vision carry on in their colorful '80s fever dream, the outsider storyline will follow the events of those trying to reach her from the very start, leading up to when she ejected from Wanda's world at the end of the last episode (and possibly even after that!)

There's no better trailer reveal like a good old-fashioned Murder Board full of possible clues about the plot, and this is no exception. Firstly, Westview is apparently in New Jersey, and all the "neighbors" of the town New Jersey residents. All except for one — Agatha, whose identity has long been in question by fans. There's another glaring absence — queen bee Dottie is nowhere to be seen. Agnes did say she was the key to everything in the town, could she be the key to the outside world as well?