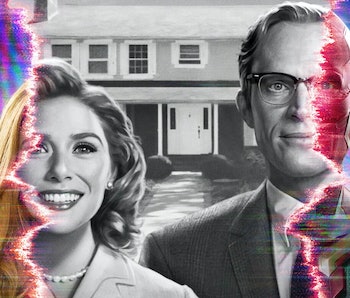 This January, WandaVision will go where no Marvel Cinematic Universe film has gone before. The Disney+ series is primed to be the first MCU project released in more than a year. The concept art and official trailer suggest that WandaVision will see the show's namesakes living in their own warped version of a TV show that pays homage to classic sitcoms like I Love Lucy and The Brady Bunch. However, a new leak suggests that the series’ scope extends far beyond the reaches of decades-old sitcoms and into more modern TV fare.

WandaVision took fans by surprise when it cast Randall Park and Kat Dennings to reprise their MCU roles as Jimmy Woo and Darcy Lewis. Jimmy first appeared in Ant-Man and the Wasp, simultaneously working as an FBI agent and Scott Lang’s parole officer. Meanwhile, Darcy was Jane Foster’s sarcastic intern in Thor and its sequel The Dark World.

On the surface, the characters were an odd and confusing choice for the Disney+ series — namely, they did not have any direct ties to either Scarlet Witch or Vision. Speaking with Entertainment Weekly, WandaVision showrunner Jac Schaeffer hinted that Park and Dennings’ previous sitcom roles on Fresh Off the Boat and 2 Broke Girls, respectively, will lead to a fun meta twist.

“It was particularly fun to bring two veteran sitcom performers into the mix.”

The running fan theory is that Jimmy and Darcy have allied with S.W.O.R.D., an agency tasked with staving off any extraterrestrial threats, to put a stop to the warped reality Wanda (or a mystery villain) created. However, it’s possible Jimmy and Darcy will get sucked into the alternate reality that will result in a spin on the actors’ very own sitcom experiences.

We know that Monica Rambeau will enter this strange sitcom space. The trailer revealed that she would be kicked out of the warped reality eventually, presumably failing in her task to reach Wanda. Enter Jimmy and Darcy. Perhaps they’ll take turns going through the electromagnetic bubble surrounding Westview, only to wind up playing parodied versions of their former TV roles. Considering that Fresh Off the Boat was produced by the Disney-owned ABC, Park may actually get to reprise his role as Louis Huang, a father and restaurant owner.

If we’re to assume that the sitcom scope of the series keeps changing through the decades, then it’s possible that everyone who enters the warped reality will also be reimagined as a sitcom character. The idea that Jimmy and Darcy could, albeit briefly, join WandaVision’s vast TV landscape while simultaneously breaking the fourth wall with their sitcom counterparts seems in line with the spirit and trippy concept of the series.

It’s still unclear why Jimmy and Darcy will show up in WandaVision, what roles they’ll play within the larger plot, or what that means for their future in the MCU. Either way, it won’t be long before we find out.