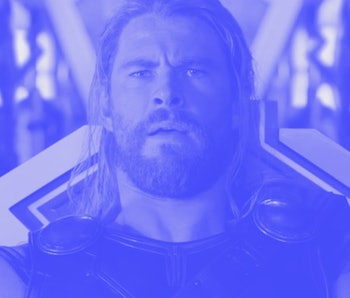 Sorry Stephen Strange, but the most exciting movie on Marvel’s 2022 calendar is Thor: Love and Thunder. Not only does the movie herald the highly-anticipated reunion of Chris Hemsworth and Taika Waititi, but Thor 4 will also rope in the Guardians of the Galaxy, Natalie Portman’s Jane Foster, and a new villain played by Batman himself (aka, Christian Bale).

It’s that last cast member who has us concerned, though. Not because Bale isn’t up to the task of portraying a supervillain in the Marvel Cinematic Universe, but because recently leaked Thor 4 action figures suggest his character Gorr the God Butcher could be a bit of a dud.

Let’s take a closer look, but first, consider this your friendly neighborhood spoiler warning. Danger ahead!

On Saturday, April 9, photos of the Legends action figures based on Thor: Love and Thunder leaked online. The set includes two versions of Thor (one dressed as a Viking god and another as an ‘80s rockstar), Jane Foster, Valkyrie, Star-Lord, Groot, and Gorr. You can take a closer look for yourself on Reddit.

Overall, there’s not much to note in these leaks. Everyone pretty much looks the way we’d expect, and previous images had already revealed the latest iteration of Thor and Jane’s armor. The action figures do confirm that Portman’s character will be called “Mighty Thor” (a reference to the comic where she takes on that godly mantle). It also reveals that Thor himself will join the Ravagers at some point in Love and Thunder.

As for Christian Bale’s Gorr the God Butcher, he doesn’t look particularly menacing. Dressed all in white with pale white skin, he’s mostly comics accurate but still missing the viciousness of the original character. (Where are the tentacles?!) His legendary Necrosword also looks kind of basic.

Thankfully, a second image showing the side of the box offers a bit more encouragement. In what appears to be an edited still from the movie, we see a version of Gorr with a bit more personality thanks to scaring across his body and red lifeless eyes. Now that’s an MCU supervillain we can get behind! (But we still want face tentacles.)

Thor 4 leaks: Should we be worried?

Short answer: probably not. While toymakers often work directly with Marvel Studios, they’re rarely getting full spoilers for unreleased movies, and it’s no secret that action figures typically have to simplify the character designs seen on the big screen.

Still, until we actually see a picture of Gorr the God Butcher in Thor 4 for ourselves, we’re going to remain cautious, just in case. On the plus side, maybe this is the motivation Marvel needs to finally release a trailer for the new movie.