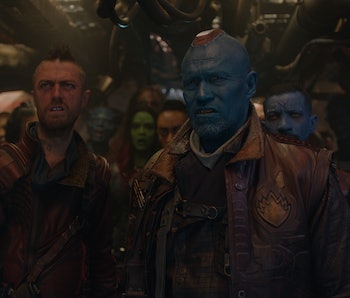 We first see Yondu illuminated in the window of a whorehouse, where he’s rejected by the Ravagers and approached by Ayesha. Later, we watch his heart-to-heart with Rocket — they scream armchair psychiatry at each other until Rocket cries — and he gets one last joke in before freezing to death in Star-Lord’s arms.

That joke, of course, is, “I’m Mary Poppins, y’all,” which ranks among the dopiest goofs in Gunn’s sequel.

To understand the full weight of Yondu’s kaleidoscopic rainbow funeral means taking a step back and analyzing the group that rejects and then posthumously accepts him again. Marvel’s Ravagers, much like Firefly’s Reavers, are unruly space pirates, infamous for pillaging and beer-chugging. To “ravage” is to extensively destroy or cause damage to, though the term usually has a sexual connotation. Yondu and the Ravagers certainly leer at Gamora in Guardians, but we don’t see them carouse with robotic sex workers and soak baby aliens in liquor until Guardians Vol. 2.

So what’s the deal with Yondu and the Ravagers? We’re told in the first film that Yondu kidnapped Peter Quill off Earth — the planet the Ravagers call “Terra” — and decided to force him into the brotherhood. We learn in Gunn’s sequel that Yondu had already delivered multiple children to Ego, only to realize, after all his deliveries, that Ego was murdering his own kids once they failed to become demi-gods. Rather than stick another child on Ego’s altar, Yondu simply disappeared, with Peter in tow, taunting him in view of the other Ravagers to keep their cover intact.

It’s not against the Ravager code to love others — though from the actions of Ravagers like Taserface, one might assume so — so Yondu’s big mistake was kidnapping Peter in the first place. When Yondu argues with Stakar Ogord (Sylvester Stallone), it becomes clear that Yondu’s crew has been groaned about for decades.

Yondu: Are you gonna listen to what I gotta say?

Stakar: I don’t gotta listen to nothing, you betrayed the code. Ravagers don’t deal in kids! […] You may dress like us, but you’ll never hear the hordes of freedom when you die, Yondu, and the colors of Ogord will never flash over your grave.

Stakar, of course, refers here to the fireworks display we see at the end of Guardians Vol. 2. After Rocket contacts the Ravagers to explain that Yondu saved Peter from Ego, Stakar and his followers light up outer space with the “colors of Ogord” (which are, apparently, every color).

Stakar was the Ravager to welcome Yondu, an escaped Kree slave, into the brotherhood. This, of course, explains why Yondu’s skin is blue, like the other Kree we see in the first Guardians. The larger, complex organization of space pirates who make up the Ravagers is an invention of the Marvel Cinematic Universe; in the comics, the “Ravagers” are simply Yondu’s band of criminals. Though Stakar is a comics character, he’s actually the son of Kismet, aka the comics version of Ayesha. In Gunn’s sequel, all these names are simply jumbled up and made into a new tapestry of characters.

Guardians of the Galaxy Vol. 2 is in theaters now.