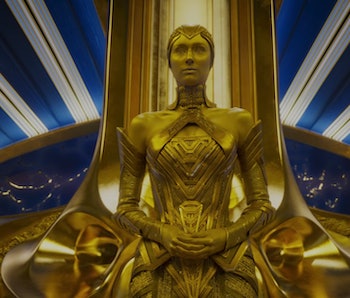 As the Marvel Cinematic Universe expands its scope to the cosmos, alien races of all kinds are making their way to the big screen. In Guardians of the Galaxy Vol. 2 from James Gunn, one society, in particular, make their presence known: the Sovereign. With illustrious gold (and thin) skin, the prone-to-insult Sovereign pursues the Guardians after Rocket (voiced by Bradley Cooper) steals one of their batteries. But whereas characters like Kurt Russell’s Ego the Living Planet and even Taserface are all from comics, the Sovereign are not. The Sovereign are an MCU original.

Minor spoilers of Guardians of the Galaxy Vol. 2 follow.

In the film, Elizabeth Debicki (The Man from U.N.C.L.E.) plays Ayesha, the High Priestess of the Sovereign. Ayesha becomes slightly unhinged in her obsession to arrest the Guardians of the Galaxy, who offended her people by stealing from them. But in the comics, Ayesha wasn’t of the Sovereign. Instead, she was a humanoid from Earth created by the Enclave, a group of rogue human scientists who wanted to take over the world. Ayesha, also known as Kismet, was their second creation; their first was Adam Warlock, who rebelled against them and later led the charge in The Infinity Gauntlet.

The Sovereign are original to the Marvel Cinematic Universe. So, aside from what we see in Vol. 2 — which is quite a bit, admittedly — there’s not a lot to infer on their society. We don’t know what Sovereign values are, nor the influence they wield in the galaxy. We know they take insults seriously, they’re affluent, and they don’t uphold a democratic government as evidenced by Ayesha’s ceremonious walks outside their halls.

But there is accountability. In one of the end credits scenes, Ayesha must face judgment for wasting resources en masse. But it’s not too bad because the Sovereign have mastered drone technology, based on how their fighter pilots fly remotely, far from harm’s way.

By all accounts, the Sovereign appear like a picture-perfect society. Their soldiers are highly trained but work in safety, and there is clearly a lot of wealth to go around. But with Ayesha in the process of making her own perfect being, Adam Warlock, it’s curious what standing their people will have in the future.

Marvel’s Guardians of the Galaxy Vol. 2 is in theaters now.