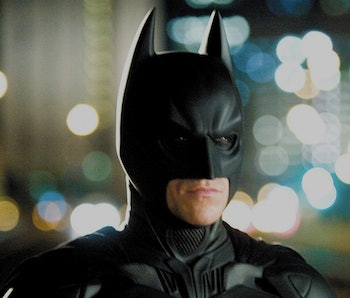 Christopher Nolan was ahead of his time when he created what's considered by many to be the seminal Batman film trilogy: Batman Begins, The Dark Knight, and The Dark Knight Rises. His legacy continues to shape superhero movies today, even as new interpretations of the Caped Crusader and his archenemy the Joker continue to crop up.

With the first two films in Nolan's Batman saga leaving Netflix next month, now's your chance to revisit the trilogy with a fresh lens. These four long-debated fan theories, ranked from least to most plausible, will definitely reshape the way you think about these modern classics and the Batman franchise in general.

4. Joker and the narrator from Fight Club are the same person

This theory from Reddit user blindsighter proposes that the Clown Prince of Crime was the protagonist of Fight Club (the novel, not the movie, Fincher fans!). It seems like a joke overheard at a comic book shop until you read the evidence. In the book, the unnamed protagonist is taken to an insane asylum and states:

"The bullet out of Tyler's gun, it tore out my other cheek to give me a jagged smile from ear to ear. Yeah, just like an angry Halloween pumpkin."

Wondering how Ledger's Joker got those scars? This might just be the answer.

There are other clues too. Both characters are unnamed to the audience and both are troubled terrorists looking to spark a revolution. Even if they're not the same person, there's clearly some kind of inspiration or awareness going on between the two.

3. The Dark Knight trilogy is a retelling of the biblical Book of Job

Sure, there's nothing new under the sun, and all stories can be traced to an older one. That said, it's hard to see how this Batman story could be cribbed from the actual Bible. Enter this theory by Reddit user DustyPotpourri, which claims Nolan's trilogy adapts the infamous Old Testament story the Book of Job.

The Book of Job tells the story of a wager between God and Satan to persuade a man named Job to give up his faith in God. The devil sends countless hardships and tragedies to the poor man, but his faith never wavers. Sound familiar?

Bruce Wayne loses everything in The Dark Knight, but his faith in justice never slips no matter what the agents of evil throw at him. Whether or not the films were intended as an adaptation, there's certainly an interesting comparison to be drawn between the two.

2. The Joker is ex-military

Ah yes, the classic. It's difficult to ascertain who exactly was the first to share this idea, but it's considered canon even to famous geeks like Patton Oswalt. Essentially, the idea is that most of the Joker's actions are motivated by his past combat experience — probably in special ops — and his mental state can be attributed to severe PTSD. He clearly has advanced combat skills, and even expresses sympathy towards soldiers in his highly-quoted hospital bed-side monologue to Harvey Dent.

This would be #1, but certain inconsistencies and Joaquin Phoenix's recent Oscar-winning take on the character nudges it down a slot on our list, leaving an opening for a stunning new fan theory...

1. The Joker is really the hero of The Dark Knight

Sympathizing with movie villains can be a slippery slope from "Loki's not such a bad guy" to "Thanos makes some good points," and when it comes to the Joker, this issue is even more complicated. But Reddit user generalzee says Joker is really the one to side with, at least in The Dark Knight.

In a way, Batman and the Joker have similar missions: they want to clean up Gotham. The only difference is how they go about it.

While the Dark Knight was retired and living it up as a billionaire playboy, the Joker basically eliminated all the organized crime in Gotham and killed a lot of corrupt officials. If we don't condemn Batman's vigilante justice, it's difficult to condemn The Joker's. Try watching the movie again in the Joker's (comically oversized?) shoes, and see whether your viewpoint shifts.