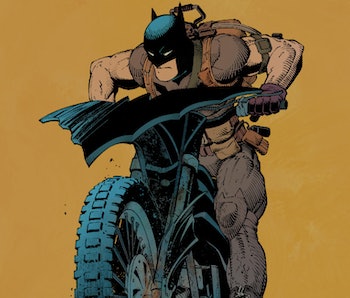 Just how many Batman comics is Matt Reeves reading? A lot, it looks like. On Friday, set photos of The Batman starring Robert Pattinson leaked on places like Reddit and Twitter, revealing in better lighting the costume Pattinson will wear as the new Batman of the DC film franchise.

While the costume looks unflattering (it's likely a stunt suit, which means it's in rougher shape than the costume used for principal shots), fans shouldn't freak out. In fact, it appears Matt Reeves has done his homework because Pattinson's Batsuit, and his motorcycle, looks they were ripped straight out of the 2013 comic book storyline Batman: Zero Year.

On Friday, new photos of Robert Pattinson's Batman costume went online, mainly on places like Reddit. The scene, an action set-piece involving a motorcycle chase, appears to take place in a Gotham City graveyard on an overcast day.

Pattinson's stunt double is seen wearing a stunt version of the Batman costume while riding a motorcycle, whose design bears similarities to the dirt bike Batman rode in the comics. The costume itself looks like an armored, DIY job Pattinson could have made shopping at Home Depot and Amazon. It looks rough (which, again, is on purpose as it's the costume worn for stunt work). But altogether, combined with the motorcycle with a bat shield, looks like an homage to Scott Snyder's and Greg Capullo's Batman storyline Zero Year.

What is Batman: Zero Year?

Batman: Zero Year is a Batman comic book storyline published in 2013. Coming off the heels of the DC reboot "The New 52" from 2011, the storyline aimed to retell a new origin for Batman at the very beginning of his crime-fighting career. The story primarily involves Batman confronting Riddler, who has taken over control of Gotham City and cut off its power supply. Assisting Batman is a young boy, Duke Thomas, who later grows up to become the superhero vigilante, Signal.

Because Gotham has fallen into disarray, not unlike a post-apocalypse, Batman rides on an armored motocross bike while wearing a different version of his costume, one that looks more "Tomb Raider" than Dark Knight.

Unclear. In fact, it appears that Reeves is referencing multiple Batman storylines for his 2021 movie. In addition to the obvious Zero Year vibes, the Batman costume itself looks like a mish-mash of the Batman: Arkham video game series and David Mazzucchelli's art from the Frank Miller storyline Batman: Year One. And then there were those other set photos leaked today that appears to indicate Reeves is including Batman: The Long Halloween to some degree

We do know that Reeves is aiming for a younger, less refined Batman in his new movie. Unlike Ben Affleck's previous incarnation, Pattinson is portraying a Batman in the very early days of his career, again similar to storylines like Year One and Zero Year. So it makes sense that even as a billionaire, Pattinson's Bruce Wayne wouldn't know how to outfit his costume to prepare for every dangerous scenario. He's still figuring it out!

We really won't know until we see more of The Batman. San Diego Comic-Con is months away, and the film won't arrive in theaters for more than a year. We'll just have to be patient until then. Luckily, you can read comics like Zero Year right now.