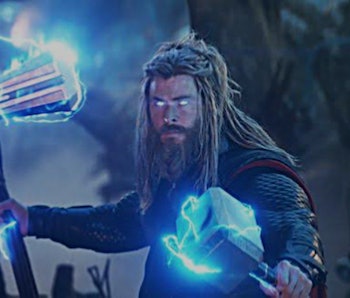 Marvel fans always look forward. Though it may be a mere week since the release of the Doctor Strange in the Multiverse of Madness trailer, focus is shifting to the next release, Taika Waititi’s Thor: Love and Thunder. The fourth installment of the series may have been lurking in the background, but with the Doctor Strange sequel’s May 6 release date hurtling towards us, it’s worth speculating about the next movie in the batting order.

Using the precedence established with recent Marvel movies we can predict the most likely window for a trailer release, and it’s sooner than you may think.

When you think about fan anticipation for a trailer, it’s hard not to think about the recent fervor that surrounded the release of Spider-Man: No Way Home. The anticipation for it was feverish, as a trailer for the multiversal adventure wasn’t released until a mere month before the movie itself came out.

Doctor Strange 2, on the other hand, secured the beloved Super Bowl commercial reveal, meaning the trailer was released 82 days before the film is scheduled to hit theaters.

The Doctor Strange 2 trailer had a Super Bowl release.

None of the past five Marvel trailer releases are comparable with pre-pandemic trailer release strategies (Avengers and Black Panther both had exceptionally long gaps before their theatrical premiere), so clearly there’s a new normal in the way Marvel publicizes its movies now that people are seeing movies less and anticipating Marvel films more.

So what’s the window for a Thor 4 trailer release? The longest gap between trailer release and premiere in the past two years has been Eternals’ 165 days. As anyone who went to the movies in Fall 2021 can attest, it felt like that two-minute trailer preceded every movie for eons. By that logic a Thor 4 trailer, or at least a teaser, has been due since January 24.

But since the time in-between Marvel movies is growing shorter, perhaps Thor 4 will have a short publicity run too. If we work by No Way Home’s hyper-fast schedule, the latest we can expect a trailer is June 8.

Knowing Marvel, a happy medium schedule like Doctor Strange 2’s is probably the best bet. If the Thor 4 trailer follows its model, we can expect to see it on April 17.

These dates may be all over the place, but considering how Thor 4 is coming hot off the heels of Doctor Strange 2 in May, the most likely window for a first trailer is sometime around that May 6 release date so Stephen won’t steal Thor’s iconic thunder. Still, expect to see a trailer anywhere between April 17 and June 8.