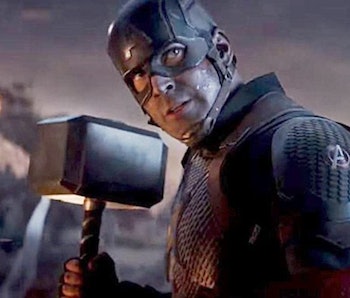 Thor’s hammer is one of those few iconic artifacts of the Marvel Cinematic Universe. Impossibly heavy to anyone else, Thor can lift it with ease because he’s “worthy.” Besides the God of Thunder, only a handful of people have ever wielded the hammer: Steve Rogers, Vision, and Hela. So what makes these characters so “worthy” of carrying the hammer more than any other Avengers? The answer may not lie in destiny, morality, or the inner machinations of the hammer but the carriers themselves.

According to a fan theory by Redditor whatdidyoudo1, the hammer’s enchantment may be wildly misunderstood. Instead of objective humility, the “worthiness” could be defined by each person who wields the hammer. If someone thinks they are deserving of Mjölnir based on their own definition of “worthiness,” then that alone could give them the power to pick up the hammer.

That may sound too simple, but when you look at the history of Mjölnir carriers, you might start to see a pattern. For example, Thor needed humility to become worthy in the first Thor film, but he never lost his cocky streak. He’s a god, after all. Perhaps Thor’s idea of “worthiness” is being like the best person he knows — his father.

Then, there’s Steve Rogers, whose entire personality is centered around being “worthy.” His “good” became “great,” so whatever worthiness he was innately born with was enhanced by the super-soldier serum. But maybe his worth isn’t defined by his ethics, but the sense of duty and righteousness he has in his role as Captain America.

Vision can easily lift the hammer in Age of Ultron because as a synthezoid, his opinion of himself is purely based on logic. He sees himself 100% objectively, which is one of the keys to self-worth.

However, this doesn’t mean every person who is worthy is objectively good. Hela was able to lift —and destroy — the hammer in Thor: Ragnarok because she has the same self-confidence as Thor but with entirely different intentions.

What does this mean for the future of the MCU? Well, if this theory is true, then it has enormous implications for Thor: Love and Thunder. If Jane Foster really is the next person to wield the hammer, it won’t be because of the mysterious mystical powers of Mjölnir, but what lies within Jane herself.

It also means there could be more potential wielders of the hammer. Could Thanos have used the hammer against the Avengers? After all, he certainly believed he was on a righteous mission to halve the Earth’s population. Could future villains who abide by their moral reasoning use this weapon?

Though it may seem like Thor’s hammer is a test of morality, it may just be a measure of self-esteem.

More like this
Entertainment
Jan. 15, 2023
3 ways Marvel Phase 5 can fix the MCU’s biggest problems
By Dais Johnston
Entertainment
Jan. 26, 2023
Corey Stoll could have the chops to make a live-action M.O.D.O.K. work
By Mónica Marie Zorrilla
Entertainment
Jan. 17, 2023
Guardians of the Galaxy 3's Adam Warlock reveal may be a big misdirect
By Eric Francisco
LEARN SOMETHING NEW EVERY DAY.
Related Tags
Share: