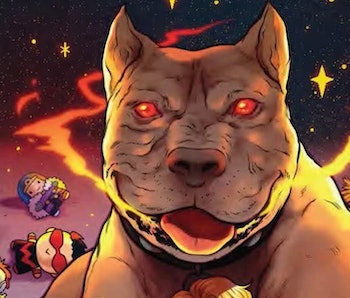 Thor 4 will be a weird, wild time.

Marvel Studios has yet to officially confirm much about the film’s plot, but its zaniness already seems apparent. Indeed, with Thor: Ragnarok writer-director Taika Waititi returning to helm next year’s Thor: Love and Thunder, it promises to be an even more ambitious follow-up to that acclaimed 2017 predecessor.

Early reports and leaks suggest that the film will lean further into the more obscure side of Marvel’s God of Thunder comics than any previous Thor film, with Jane Foster (Natalie Portman) set to transform into The Mighty Thor and characters like Toothgnasher and Toothgrinder set to make appearances. There’s no reason to believe Love and Thunder won’t feature other, lesser-known Thor comics characters either.

The Theory — Set photos from Thor: Love and Thunder revealed earlier this year that both Toothgnasher and Toothgrinder would be appearing in the highly-anticipated Marvel sequel. In the comics, the characters are a pair of mystical, powerful goats who pull Thor’s chariot through the cosmos.

Those familiar with the characters understandably took their inclusion in Thor: Love and Thunder as confirmation of something that has been long-suspected about the film — namely, that it’ll see Waititi and co. diving headfirst into the Thor comics with an eye to bringing out their innermost weirdness. With that in mind, there’s a very high chance that Toothgnasher and Toothgrinder won’t be the only MCU pets to appear in Love and Thunder.

A God’s Best Friend — In the comics, Thori is a Hel-Hound — one of Garm and Hel-Wolf’s seven pups — who is initially “adopted” by Kid Loki. Thori goes on to betray Loki and is subsequently taken in by Hel-Wolf.

Eventually, Thori is captured by The Collector and held in the Marvel villain’s museum, before being freed by Thor. In the comics, the Hel-Hound, along with Toothgnasher and Toothgrinder, has remained by the God of Thunder’s side ever since.

All of this is to say that, with Toothgnasher and Toothgrinder appearing in Thor: Love and Thunder, it seems possible that Thori could debut. Not only is the character a legitimately fearsome and powerful beast, but he’s also hilarious and fiercely loyal. As a talking dog obsessed with obliteration and chaos, he’d make a great on-screen companion for Chris Hemsworth’s Thor — especially with someone like Taika Waititi writing their scenes together.

How could he appear in Thor: Love and Thunder? That’s less clear; then again, we have no idea how Toothgnasher and Toothgrinder will be introduced either. For all we know, Thor could happen upon Thori at some point along his journey. It wouldn’t need to be more complicated than that.

The Inverse Analysis — Thor: Ragnarok marked a major course correction for the Thor franchise, steering it away from the darker, more self-serious tone of its first two installments in favor of something tonally more liberated and lighthearted. This move paid off in spades for Marvel, and all signs suggest that Waititi is going to lean further into that direction with Thor: Love and Thunder.

Here’s to hoping the film will also give Thori, the God of Thunder’s most unique comics companion, a much-deserved big-screen debut.