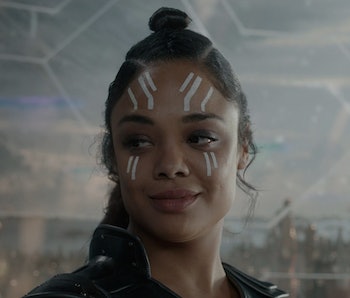 The Asgardians are getting into a lucrative new business in Thor: Love and Thunder.

Filming on the fourth Thor film has been underway for several months, and behind-the-scenes leaks and set photos are already offering fans a sneak peek at some of Love and Thunder’s surprises. Even now, as the film prepares to wrap up its Australia shoot in the very near future, leaks from the production continue to pop up online.

This week brings a new batch of Thor: Love and Thunder set photos, which reveal an unexpected — but totally delightful — development related to the Asgardians’ new home on Earth.

The Leaks — The Daily Mail released a handful of new Thor: Love and Thunder images online this week. The images, in providing a bird’s-eye view of the production, reveal the film’s New Asgard set for the very first time.

The images indicate that the Asgardians’ coastal village has been upgraded quite a bit since we last saw it. In particular, the set photos depict a number of new tourist attractions scattered throughout the town, including the “New Asgard Hotel” and an “Asgard Tours” building, where visitors can apparently go to set up “aerial sightseeing” tours of the village.

Notably, a big Viking-style boat/yacht is parked right next to the sightseeing building. It appears to contain rollercoaster seats (safety straps and all), built on top of the boat’s deck. Does that mean the Asgardians will give flying Viking boat tours to human tourists in Thor: Love and Thunder? Given these leaks, it’s definitely within the realm of possibility.

Sightseeing in New Asgard — There’s no telling how New Asgard’s renovations and upgrades could factor into the overall plot of Love and Thunder.

The film’s narrative already includes — among other things — a major conflict between Thor (Chris Hemsworth) and Gorr the God Butcher (Christian Bale), Jane Foster (Natalie Portman) transforming into The Mighty Thor, and a new Asgardian play about the events of Thor: Ragnarok (with celebrity cameos aplenty). With all that in mind, it seems likely that New Asgard’s makeover will probably exist solely as a delightful gag, one of many writer-director Taika Waititi is expected to deliver in the film.

Above all else, these images suggest that it was a brilliant move on Thor’s part to name Valkyrie (Tessa Thompson) as the ruler of New Asgard at the end of Avengers: Endgame. She appears to be running the place quite capaably. Now, if only she could find a queen to rule alongside her…

The Inverse Analysis — Plenty about Thor: Love and Thunder remains a complete mystery for the time being, including how its various comic book-inspired storylines will connect. But all the plot points and celebrity cameos revealed from the film thus far have served to further cement Love and Thunder’s potential as a high-flying sequel to 2017’s ambitious, critically acclaimed Thor: Ragnarok. These surprising, tourist-attraction upgrades to New Asgard are simply one more reason to look forward to seeing what tricks Waititi and his cast have up their sleeves this time.

Thor: Love and Thunder will be released in theaters on May 6, 2022.