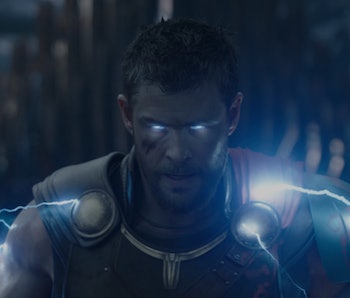 Thor: Love and Thunder is nearly finished filming. Principal photography began on the highly-anticipated Marvel sequel at the start of this year and has continued uninterrupted for the past several months.

The fourth Thor film is nearing the conclusion of its Australia shoot, but that doesn’t mean there isn’t still work to be done. In fact, it looks like the Love and Thunder production may shift to another location once its work in the land down under comes to a close — a location with huge ramifications for the MCU.

The Report — According to a new report from Murphy’s Multiverse, some members of the Thor: Love and Thunder cast and crew will be returning to shoot scenes for the film later this summer. The additional filming will reportedly last for only a week and — this is where it gets interesting — will take place in New York City.

The report does not include any specific details about Love and Thunder’s alleged New York filming, including what the NY scenes might entail or who from the film’s immense cast will even be present for them. However, since New York City is such a central location in the Marvel universe, there are a few reasons Thor: Love and Thunder may have some scenes set there.

Thor in The Big Apple — Assuming this report is correct, it’s worth noting that Thor: Love and Thunder won’t mark the first time that the MCU’s God of Thunder has set foot in New York City. The character has been seen in the city plenty of times already, including in 2012’s The Avengers and 2017’s Thor: Ragnarok. So it’s possible the film could simply be going there to shoot moments of Thor (Chris Hemsworth) just hanging around in New York (or scenes involving Natalie Portman’s Jane Foster).

But given just how many other MCU characters are based in New York City, it seems unlikely that Thor: Love and Thunder would include scenes there and not have its titular Avenger cross paths with another Marvel hero or two.

The immediate, obvious cameo contenders are Spider-Man (Tom Holland) and Doctor Strange (Benedict Cumberbatch), two of the MCU’s most prominent NY-based characters. Thor also has an established history with Strange thanks to Ragnarok, so Love and Thunder could feature the pair interacting again. Considering how memorable the Doctor Strange sequence was in Ragnarok, it’s hard not to hope that we are actually in for another Strange and Thor crossover moment here.

Fortunately, since the city is essentially the central hub of the MCU, there’s the potential for Thor to meet up with practically any Marvel hero in New York. Doctor Strange in the Multiverse of Madness and Spider-Man: No Way Home will both contain scenes set in New York as well, so Love and Thunder’s plot could even somehow tie into the multiverse-centric stories of those two films.

That’s an interesting possibility, especially since No Way Home and Multiverse of Madness are set to cross over in their own ways.

The Inverse Analysis — As of now, this Thor: Love and Thunder report is unconfirmed, so make sure to take it with a bit of a grain of salt.

The finale episode of The Falcon and the Winter Soldier also proved once and for all that a Marvel title could take place in New York City and still not have crossover appearances from the MCU’s NY-based characters. It’s not out of the question then for Thor: Love and Thunder to go to New York and end up not featuring a cameo appearance from someone like Spider-Man or Doctor Strange.

That’d be disappointing, but to Thor: Love and Thunder’s credit, it’s already got a pretty impressive assortment of cameos lined up.

Thor: Love and Thunder will be released in theaters on May 6, 2022.