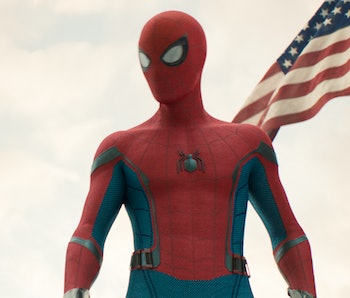 Not since X-Men in 2000 has the Statue of Liberty been in danger. In leaked set photos of Spider-Man: No Way Home in Atlanta, a bus stop poster ominously hints at a big, New York-centric finale to the third (and final?) Spider-Man movie starring Tom Holland. And it seems another hero from the Marvel Cinematic Universe may be involved, too.

What Happened? — On Monday, Houston Coley, host of the defunct film podcast Blockbusted (not to be confused with a newer podcast also titled Blockbusted) shared on his now-deleted Twitter account @blockbustedpod a picture of a New York City bus stop that sports a poster of the Statue of Liberty carrying Captain America’s shield. Another Twitter account, @dailynowayhome, re-shared the photo in question.

The scoop blog Murphy’s Multiverse also reported on the poster, adding that the Statue of Liberty “will serve as the backdrop for a KEY scene in the film.” And it is the latest piece of evidence that the 2021 Spider-Man movie will have a big New York-set climax.

While the bus stop poster alone isn’t spoiling anything, there’s a lot of possible things to glean from it and how it may foreshadow the end of Spider-Man: No Way Home.

The End of No Way Home? — The poster hints at least three things in No Way Home.

Previously, a book of concept art for Spider-Man: Far From Home contains a double-page art for a scrapped scene with Spider-Man swinging near the Statue of Liberty while on the run from the NYPD. Presumably, the scene happens just after Spidey’s identity is unmasked by Daily Bugle’s J. Jonah Jameson, which happened in the mid-credits scene of Far From Home.

With Peter Parker’s known in the MCU, 2021’s No Way Home may include this chase at the Statue of Liberty. (Sequels using cut scenes from previous movies is not unheard of. Blade Runner 2049 opens with a scene that was originally written for the first Blade Runner 35 years prior.) After the poster was revealed, @dailynowayhome made this connection between Far From Home and No Way Home on Twitter.

The Inverse Analysis — As stated, the poster itself doesn’t spoil anything about No Way Home. (And it doesn’t have any clues about rumored cameos like Tobey Maguire, either.) But with how visual storytelling and foreshadowing effectively works in movies, a bus poster is a very smart way to set up where a character like Spider-Man will end up before the movie ends.

Think about how the clocktower is established as a key location in the beginning of Back to the Future. Neither Marty nor Jennifer actually interact with the townsfolk protesting to preserve the clocktower (except for when Jennifer writes her phone number on a flier), but it’s in sharp focus in the background. Later in the movie, it’s made very clear why the clocktower is so important. And it’s satisfying precisely because of this smart narrative establishing.

Whether the Statue of Liberty blows up like it did in the first X-Men, Spider-Man will probably need to swing by the statue at some point during No Way Home. And it will actually be a first for Spidey in his movies! He’s been everywhere from the Queensboro Bridge to Columbia University to even Joe’s Pizza. But the Statue of Liberty? You can’t get more New York than that.