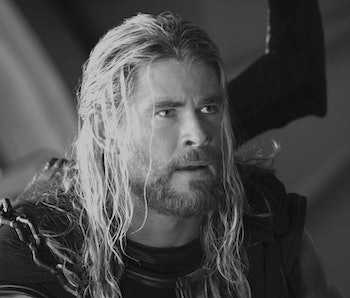 The God of Thunder is changing his look. Chris Hemsworth is set to return as the iconic Avenger in next year’s Thor: Love and Thunder, which will feature a number of other notable MCU characters, including Tessa Thompson’s Valkyrie, Natalie Portman’s Jane Foster, and (most of) the Guardians of the Galaxy.

The film is written and directed by Taika Waititi, and a new leak suggests Love and Thunder is going to step even further into the absurd, colorful side of the MCU than Waititi’s Thor: Ragnarok did.

The News — Thor: Love and Thunder began filming last week, and some new set photos from the production offer our first real look at Hemsworth’s Thor and Chris Pratt’s Star-Lord in the film. Both characters are rocking decidedly different looks than they were the last time we saw them.

Thor, in particular, appears to have abandoned his Big Lebowski-inspired look from Avengers: Endgame for something resembling more of a... rock star from the ‘80s? He basically looks like a cross between Bruce Springsteen and the lead singer of some random hair metal band. Behold:

What This Means — It’s hard to know right now how Thor's new look will play into the story of Thor: Love and Thunder, or how the character settles on it in the first place. For what it’s worth, Star-Lord’s costume in the photos is fairly similar to his previous one, with a few small additions here and there. The new armor on the sleeves and shoulders of his jacket does feel slightly Asgardian, which makes us wonder: have Thor and Star-Lord started to rub off on each other at the start of Love and Thunder?

If that is the case, it’s possible Thor’s new rock star look is a direct result of him being exposed to the '70s and '80s rock music featured on Star-Lord’s mixtapes. Visually, the costume also fits in well with the playful, tongue-in-cheek tone that Waititi established in Thor: Ragnarok, and it seems to signal a return to a more joyful mood for the character as well.

Throughout most of both Infinity War and Endgame, Hemsworth’s Thor was a brooding, angry character — one who blamed himself for the deaths of Loki and countless others at the hands of Thanos. In Infinity War, that anger came through in his quest to construct Stormbreaker and kill Thanos himself. In Endgame, those emotions led the character down a spiral of intense laziness and self-doubt as he struggled to deal with the fallout of Thanos’ (initial) victory. Fortunately, now that Thanos is dead and everyone he snapped has been brought back, it looks like Thor’s spirits may finally be up again.

The Inverse Analysis — The God of Thunder has gone through quite a few costume and style changes during his time in the MCU. While none of them have quite been as surprising as his Endgame transformation, his costume in these Thor: Love and Thunder set photos certainly marks another unexpected change-in-direction for the character. Given what they did together in Ragnarok, one can only imagine what kind of antics and gags Waititi and Hemsworth have planned for the character this time around.