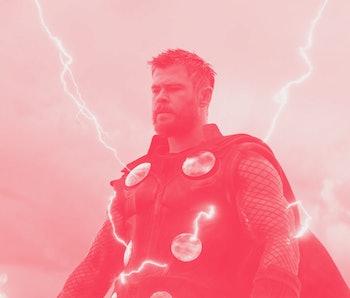 Thor Odinson gave up the title of King of Asgard in Avengers: Endgame, passing on that mantle and responsibility to Valkyrie before joining the Guardians of the Galaxy on whatever journey they were off to next. We know the God of Thunder will next appear in Thor: Love and Thunder, the fourth installment in his solo run of Marvel movies. However, now that Valkyrie is ruling the remaining Asgardians and Jane Foster is being set up to become the Mighty Thor, it’s possible Love and Thunder will be Thor’s swan song. That could also mean that he won’t appear in Avengers 5 at all, which opens up some very interesting possibilities.

Thor’s journey from self-centered, spoiled prince to noble hero has been one of the highlights of the MCU. He’s grown a lot in the years since 2011’s Thor. The Asgardian went on to become one of the founding members of the Avengers. Thor may have lost his way there for a while following the events of Infinity War, but Endgame re-energized his passion for justice and he fought alongside the Avengers to defeat Thanos for good. After that, however, it seemed like Thor was pretty much done with being a hero altogether.

Avengers 5 (the untitled but inevitable team-up movie) will more than likely include a new roster of superheroes. After all, Endgame saw the death of Tony Stark, Captain America's retirement into the past, and Black Widow’s sacrifice to obtain the Soul Stone. That’s three of the six original team members gone. Hulk is less angry and may not even want to fight anymore, and there’s no telling if Hawkeye will want to stick around either.

That leaves Thor. Now, the God of Thunder has had a good run and it’s possible that Love and Thunder will be used to transition Thor out of the MCU completely. But, wait? Isn’t Chris Hemsworth signed on for more MCU films. Yes, he’s signed on for Thor 4. There’s also a rumor that his new contract will potentially see him appear in Guardians of the Galaxy Vol. 3, but that’s the extent of what we know. Either way, it doesn’t seem like there’s a lot left to mine out of Thor’s story within the MCU.

With all that in mind, Jane Foster’s Thor could take his place in Avengers 5. Jason Aaron’s seven-year run of Mighty Thor saw the God of Thunder become unworthy of wielding Mjolnir. The hammer was left without a wielder, but not for long. While Jane, who had been diagnosed with cancer, was visiting Asgard, Mjolnir sought her out and she attained all of Thor’s powers.

Thor stepped aside and Jane took center stage. As Mighty Thor, she fought in the “Secret Wars” comic storyline, which saw the attempted destruction of Earth and many of its alternate universes. Mighty Thor played a pivotal role in saving and restoring the multiverse, fighting alongside several of Marvel's most well-known heroes to do it. (It's also worth noting that the Russo Brothers, who directed Avengers: Infinity War and Endgame, expressed interest in returning to Marvel for a Secret Wars movie.)

Considering how prevalent Valkyrie and Jane are expected to be in Love and Thunder, it can’t be a coincidence that these women will finally be getting more crucial roles in the MCU so soon after Thor passed on one mantle in Endgame. Knowing that Jane will wield Thor’s hammer in the next solo installment of Thor’s story would be the perfect opportunity to retire the character and allow Jane’s Mighty Thor to take up the fight in Avengers 5: Secret Wars.

The loss of his powers would even explain why he may possibly not be around in Avengers 5. We won’t know for sure if that will be the case for a while, but Thor leaving the MCU behind for good is no longer as far-fetched as it once was.

Avengers 5 does not yet have a scheduled release date.