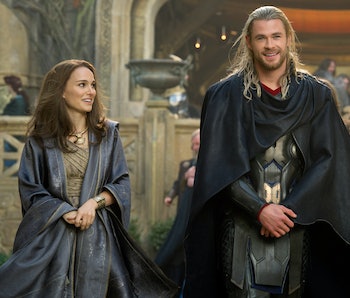 Little is known about the plot of Thor: Love and Thunder, which will be released towards the very end of Marvel Studios’ Phase Four in 2021, but a convincing new theory ties together what feels like almost every Phase Four storyline while also fixing the glaring plothole of how Jane Foster might wield Mjolnir, Thor’s magical hammer that was destroyed in Thor: Ragnarok.

A Marvel fan posted this epic theory to the r/FanTheories subreddit on Monday, revealing a compelling way Love and Thunder could loosely adapt The Mighty Thor comics storyline where Jane Foster becomes Thor, but it also presents interesting connections to The Eternals and Doctor Strange in the Multiverse of Madness while also following up directly on a few dangling plot threads from Thor: The Dark World that didn’t make it into Ragnarok.

“In present-day New York, Jane Foster is suffering from breast cancer after she was possessed by the Aether,” they write, theorizing that Foster’s experiences from The Dark World cause her to develop cancer.

In The Might Thor, Foster develops cancer through more typical means, but this presents an interesting connection to previous MCU continuity that also makes a lot of sense. Thanos injures himself in the final battle of Avengers: Endgame when using a single Infinity Stone without the use of his Gauntlet. And a half-Celestial Star-Lord couldn’t wield the Power Stone by himself in Guardians of the Galaxy vol. 1.

So how could a regular human contain the power of the Reality Stone without it having lasting consequences?

“A hammer from an alternate timeline makes its way to the main universe through the portals opened by Doctor Strange during Multiverse of Madness events,” the redditor posits in yet another assumption that makes a lot of sense.

Thor fought with Stormbreaker and Mjolnir in Endgame after taking it from a point in the past during the events of The Dark World, but Captain America returned the hammer when he went back in time to return the Infinity Stones and fix the timeline. So unless Love and Thunder takes place in a totally different reality in the multiverse or messes up the timeline by transporting Mjolnir back into the present day, the hammer has to be from another reality.

A supposed synopsis for Multiverse of Madness leaked earlier this week could help explain:

After the events of Avengers: Endgame, Dr. Stephen Strange continues his research on the Time Stone. But an old friend-turned-enemy puts an end to his plans and causes Strange to unleash unspeakable evil.

Captain America should have returned the Time Stone to the Ancient One in 2012 during the events of the first Avengers, so it’s unclear how Doctor Strange would be researching the stone if it doesn’t exist, but that “unspeakable evil” must be related in some way to the multiverse. Assuming the Doctor Strange sequel does involve portals into alternate realities, that could explain how Mjolnir (or a different hammer perhaps?) winds up in a place where an infirm Jane Foster can pick it up and become the Goddess of Thunder.

The other plot thread here involves Thor leaving the Guardians of the Galaxy to search for Lady Sif, his former Asgardian companion who was absent from Ragnarok because of boring real-life scheduling reasons. We know Lady Sif died from Thanos’ Snap but was resurrected in Endgame. Marvel Studios president Kevin Feige has confirmed that Loki (posing as Odin) banished Sif before the events of Thor: Ragnarok, so she was off-world when Asgard was destroyed.

“Sif and her new friend Beta Ray Bill are investigating about the same alien who was the lone survivor of his race, he is known as Gorr,” the theorist writes.

Here’s where recent rumors about Christian Bale being cast in Love and Thunder come in. Some sources indicate the role is mostly mo-cap, and based on Marvel Comics, he could be playing the aforementioned Beta Ray Bill. Another popular contender is this Gorr the God Butcher, the last of an alien race who felt forsaken by the gods and vowed to kill them all after he bonded with a symbiote weapon called All-Black the Necrosword.

This new theory recontextualizes Gorr’s origin story to relate directly to the Celestials, the uber-powerful beings such as Ego that created the Eternals on Earth. “Thousands of years ago the Celestials destroyed an alien planet which was judged and deemed unworthy, only one being of that race could survive,” they write. “Gorr was the one who killed Celestials for revenge.”

Even Odin feared Gorr, and a union of forces imprisoned him at some point in the past. It wasn’t until present day that he was unleashed upon the universe. The Celestials used the Infinity Stones extensively in the past, and it’s possible that with the Stones destroyed, that somehow released Gorr from captivity. All of these characters would inevitably wind up on Earth, where a new lineup of “Revengers” would have to take on Gorr.

Knowhere, the mining colony featured in Guardians of the Galaxy and Avengers: Infinity War, was said to be built on the severed head of a Celestial. Wouldn’t it make for a gnarly retcon if we learn all these years later that Gorr murdered the Celestial in this brutal way? Maybe that’s the first clue Thor learns in the movie?

Is all of this just very fun and spirited fan fiction? Probably, but if Thor: Love and Thunder is anything even remotely like that, then we’re in for a wild ride.

Thor: Love and Thunder will be released November 5, 2021.