How 'Thor: Love and Thunder's villain sets up symbiotes in the MCU

“The darkness inside of you? That darkness bows to me.” 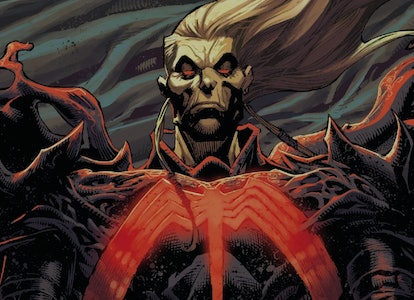 Thor: Love and Thunder is not only going to be a romantic romp through the Marvel Cinematic Universe’s cosmos, but it’s also going to bring one of the comics’ most formidable villains to life on-screen in the form of Christian Bale’s Gorr the God Butcher. As his moniker suggests, Gorr is a villain hellbent on personally murdering every god in the universe, which automatically puts several of Love and Thunder’s central characters on his list of targets.

With several months still to go until the film’s release, Marvel has released very little about Bale’s Gorr so far. However, a new look at one of the movie’s tie-in toys has confirmed that the most important weapon in Gorr’s arsenal will be coming with him when he makes his MCU debut this year.

Gorr’s Greatest Weapon — Marvel recently unveiled a handful of new LEGO sets releasing with Thor: Love and Thunder, including one called “The Goat Boat.” While the LEGO set focuses heavily on two of the film’s most exciting characters, it also includes a mini-figure of Gorr the God Butcher that comes with an all-black sword for the character to hold.

While the set’s description doesn’t name the weapon, those familiar with Gorr know that the sword in question is almost certainly All-Black the Necrosword. The weapon plays a crucial role in Gorr’s origin story and is what he most frequently uses to dispatch the unlucky gods who cross his path.

Notably, the confirmation that All-Black the Necrosword will be used in Thor: Love and Thunder also opens the door for Knull, the sword’s original wielder, to be introduced in the MCU.

Bring on the Darkness — In the comics, All-Black is the universe’s first symbiote and is born from the shadow of Knull, the malevolent being who rules over a realm known as the Abyss. Angered by the Celestials’ creation of the universe, which brings light to his kingdom of darkness, Knull creates All-Black and decapitates one of the Celestials with it. He then uses the dead Celestial to temper All-Black into a sword of living darkness, which he uses on his quest to destroy all life within the universe.

However, after Knull is left incapacitated following a fight with another god, Gorr stumbles upon the remains of the battle and bonds with All-Black. Gorr subsequently uses the Necrosword to embark on his quest to destroy all gods in the universe, while Knull is left stranded on Gorr’s planet. During his time there, Knull begins using his powers to create more symbiotes.

The entity goes on to become enemies with several notable Marvel heroes, including the Silver Surfer, Spider-Man, the X-Men, Thor, Venom, and Dane Whitman, aka Black Knight. He even attempts to claim the Ebony Blade for himself at one point in the comics, which means he could make for an interesting antagonist in a future Black Knight-centric movie or TV show.

The Inverse Analysis — Assuming the film doesn’t alter its origin story too much, Thor: Love and Thunder’s use of All-Black the Necrosword gives Marvel the chance to introduce Knull in the MCU. That’s undeniably enticing because Knull is not only one of Marvel’s most visually striking comic book villains but also someone who could appear in stories involving several of the MCU’s biggest heroes, including Spider-Man, Black Knight, the Eternals, and Blade.

Frankly, that’s an opportunity that seems too exciting for even Marvel to pass up.