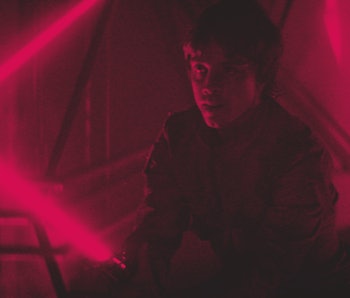 After Darth Vader and Luke Skywalker crossed lightsabers on Cloud City, Luke departed without his father’s lightsaber and without a hand. Much later, in The Force Awakens, Luke’s saber reappeared, in Rey’s possession for the entire sequel trilogy.

But what about the hand?

Weird question alert, but, worth asking anyway: in contemporary Star Wars canon, did anybody snag Luke’s severed hand? There’s a long history of the Legends canon doing all sorts of bonkers stuff with the missing Luke limb, but how about the modern canonical answer?

If you were wondering, wonder no further: the Star Wars franchise just answered the question, and like all good mysteries, it leads to even more questions.

Where is Luke Skywalker’s missing hand?

One of the earliest concepts J.J. Abrams had for The Force Awakens was to actually show Luke’s severed hand drifting through space. This was either the worst idea or the greatest idea for the Star Wars sequels, and considering the mishmash of good and bad in Rise of Skywalker, it doesn’t seem as nuts now as it seemed a few years ago.

Despite the fact that in-canon Marvel comics have charted some of the history of the missing Skywalker-family lightsaber in the Empire-era, the final resting place of Luke’s hand has been non-canonical — until now, thanks to Marvel’s Darth Vader #11.

In the comic, after a series of grueling tests involving Sith assassins and a many-tentacled space squid, Vader comes to the planet Exegol to confront Emperor Palpatine, much in the way Kylo Ren later does in Rise of Skywalker. The emperor shows Vader all the creepy things he’s got in Exegol, including:

• A giant Kyber Cyrstal, which Palpatine needs to harm in order to get the Sith action out of it. (Red lightsaber are red because the crystals have bled. Really!)

• As well as something known as “the scalpel of creation,” which seems to be the start of the emperor’s cloning era; it’s reminiscent of the barrels of Snokes we saw in Rise of Skywalker.

In one of the cloning vats, Palpatine clearly has Luke’s severed hand, and mentions that he can “use it to make anything.” This detail isn’t explored further, but the implications are huge. If Palpatine has had Luke’s hand since right after the events of The Empire Strikes Back, it seems plausible that all of Palpatine’s clones contained midichlorians straight from Luke’s blood. Which leads to a bigger question...

Could Palpatine have created a secret Luke Skywalker clone?

In Timothy Zahn’s famous Thrawn trilogy of novels, the insane Dark Jedi clone Joruus C'baoth created Luuke Skywalker, a violent clone of Luke Skywalker. Both Luke and Mara Jade had to fight this clone, and in The Last Command, we learn the clone was made from Luke’s severed hand.

Now, this story is obviously no longer part of real Star Wars canon, but the basic notion seems to be subtly rebooted in this new in-canon comic book.

Although nobody (other than me) thinks that maybe an evil clone of Luke Skywalker grabbed Baby Yoda in The Mandalorian Season 2, the fact that Palpatine could have now canonically made such a Luke-clone is a game-changer. Sure, the going theory will be a little more muddled: Palpatine got all the midichlorians he could get his claws on, and used those to make Snoke, and also, back-up bodies for himself.

Still, at the point at which Palpatine has the ability to make a new clone of Luke outright, the idea that he would make Snoke instead is sort of baffling. Back in 2016, comedian and podcaster Steele Saunders pioneered the hilarious catchphrase “Your Snoke Theory Sucks,” which somehow predicted the massive let-down that Snoke was really just a clone-puppet of Palpatine. That said, as this new Marvel comics installment proves, it seems we can’t stop thinking about Snoke even when his existence has been “explained.”

Was Snoke made from bits of Luke Skywalker’s hand and blood stolen from Baby Yoda? Did Palpatine have a bunch more random clones lying around? In Darth Vader #11, Palpatine unleashes an army of faux Sith assassins, clones he has ready to go in case Vader fails to be the best Sith apprentice of all time. The fact that this happens, and that Palpatine had already started on “The Final Order” well before Return of the Jedi, really makes you wonder why Palpatine went through with everything that happened with the second Death Star at all. Then again, the fact that the emperor has been keeping Luke’s hand in a special place could suggest that he had even more faith that Luke would become a Sith than we’ve all previously assumed.

If a future Star Wars storyline — in a live-action series or animated show or book — suddenly reveals Palpatine has an evil Luke clone, who is willing to do the bidding of the Sith, don’t say we didn’t warn you.

Darth Vader #11 is on sale now from Marvel Comics.