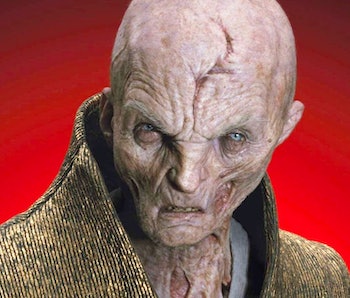 Star Wars: The Rise of Skywalker revealed that Supreme Leader Snoke, the stand-in villain of the sequel trilogy, was one of many clones created by the wily Emperor Palpatine. While on Exegol, Kylo Ren passed by tanks full of Snoke corpses, which suggested that the bodies were discarded during the experimentation process to bring Palpatine back.

However, Episode IX didn't explain all those jars full of Snoke bodies, leaving fans to speculate about how Snoke ultimately factored into the whole cloning process. Now, an intriguing new theory explains that Snoke wasn't a clone of Palpatine, but of a shawdowy prequels villain with close ties to Sheev.

Redditor user PrivateChurch13 theorized that Snoke is essentially a “reanimated corpse” of Darth Plagueis, Dark Lord of the Sith and Palpatine’s former mentor. Plagueis was never shown in the prequels, though during the infamous opera scene in Revenge of the Sith, Sheev told Anakin that Darth Plagueis (his former master) could manipulate midi-chlorians to create life through the Force itself, potentially preventing himself and the ones he loved from dying. The prospect of attaining such power to protect Padmé helps lure Anakin to the Dark side.

Drawing connections between Snoke and Plagueis isn’t necessarily new. A previous theory surmised that Snoke was an imperfect clone of Plagueis. However, this new theory takes it a step further and suggests that Palps found a way to bring Plagueis back to life — likely through unnatural Dark side machinations. Basically, Plagueis and Snoke are one and the same.

The theory makes a lot of sense, given that Snoke bears some resemblance to Plagueis from the Star Wars Legends era, aka the now defunct Star Wars Expanded Universe. They both have long faces, are remarkably tall, have sharp fingernails and small, piercing eyes. Perhaps Palpatine even believed Plagueis’ corpse still possessed Force powers that he could manipulate and that's why he tried to bring him back.

The idea itself stems from the fact that Exegol has long served as a Sith hideout and base of operations, back when Plagueis was still alive and far longer still. With that in mind, it makes sense that Plagueis would have also used the icy and well-hidden planet as a fortress to toil away with Sith experimentation, including the creation of life through midi-chlorians.

However, as clever and interesting as this theory is, it still doesn't explain why a host of Snoke corpses are still lying around on Exegol. Are these spares, or failed experiments?

From what can be ascertained from The Rise of Skywalker novelization, the Sith Eternal experimented on creating a more perfect Palpatine clone for a long time before they finally got it right. Can the same be said of Snoke?

Before he died in Return of the Jedi, Palpatine may have tried to recreate the same cloning methods using Plagueis’ body. Perhaps the first resurrection didn’t bring back the Sith lord’s Force powers, so Palps cloned his body over and over again until he was able to recreate a better version. We may never know either way, but it’s fun to think that Palpatine found a way for his Sith mentor to live on, even if the methods proved quite "unnatural."

Star Wars: The Rise of Skywalker is currently available to stream on Disney+.