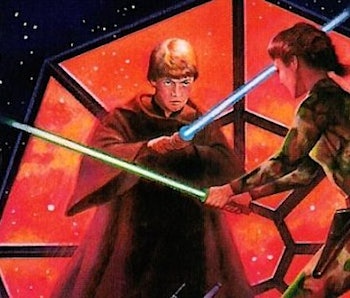 Baby Yoda just enrolled in a very elite new school. The Season 2 finale of The Mandalorian seemed to create a pretty clear ending for the journey of Grogu and Din Djarin. With the arrival of Luke Skywalker, it seems figuring out what to do with Baby Yoda is no longer Mando's problem. There could be a version of The Mandalorian Season 3 in which we see Mando visiting Baby Yoda at Jedi School. But the bond between Grogu and Mando has been the heart of the show. So now that Grogu is safe with Luke, the show is basically over, right?

Well, what if that's not really Luke? With The Mandalorian rebooting so much old-school Legends canon, the prospect of a Skywalker imposter's suddenly a lot more plausible. Here's what that could look like.

Back in 1993, the biggest lightsaber duels in Star Wars invariably involved at least one combatant to be a clone. Both Leia and Luke fought a young clone of Emperor Palpatine in the 1992 final issue of the comic book series Dark Empire. Just one year later, Luke and Mara Jade fought a clone of Luke in Timothy Zahn's novel The Last Command. The book's original cover contained a spoiler hidden in plain sight — Luke dueling Mara Jade with a blue lightsaber.

Of course, that wasn't the real Luke. It was an insane — no, literally — clone named Luuke Skywalker. At this point in the Legends Star Wars canon, clones got an extra vowel in their names. In fact, Grand Admiral Thrawn's partner-in-crime in these books was similarly off-his-rocker Dark Jedi named Joruus C'baoth. In this case, the extra "u" denoted the fact that this guy was a clone, too.

(The Palpatine clones didn't get extra letters in Dark Empire, at least not that we're aware of. But isn't it suspicious that, years later, we learned that Palps' first name was "Sheev." How long has he been a clone?)

Back when The Last Jedi was still being developed, Mark Hamill got really into reading the EU Star Wars novels. According to Hamill himself (see what we did there) he pitched an idea about an evil Luke clone to Rian Johnson. Here's what Hamill said in 2017 about the prospect of playing evil Luke.

"Oh, baby, would I love that? Not only could you get to play your evil twin, but what a great idea that you bring Luke back, and the audience starts noticing him undermining the heroes, cutting their fuel supply inexplicably, maybe even killing one of the supporting characters. It would be so mind-boggling, and then, of course, the real Luke shows up and that mystery is solved."

Mark Hamill's evil Luke idea doesn't 100 percent align with what Zahn had in his first round of Star Wars books. And, it should be noted that there's no version of an evil clone Luke that is canon right now. The events of Zahn's "Thrawn Trilogy" are still relegated to "Legends," and there's no direct indication that will change. That said, The Mandalorian Season 2 did remind us that Ashoka is looking for Grand Admiral Thrawn, who, at this time in Legends canon, would have been teaming-up with Joruus C'baoth, facilitating the cloning of Luke Skywalker, and gathering a bunch of automated starships called the Katana Fleet. So, in canon, Thrawn is (apparently) running around in the galaxy approximately at the same time he was in Legends canon. Could he be doing similar things?

The Skywalker saber, explained — In the Thrawn Trilogy, we learned the Luuke clone was created from the severed hand of Luke Skywalker. This is why Clone Luke wielded a blue-bladed lightsaber, it was his old family blade. Now, in The Mandalorian, Luke is clearly using the "correct" green lightsaber, but what if the existence of a hypothetical clone Luke has the same explanation now as it did in the '90s? In other words, clone Luke could have still been cloned from regular Luke's severed hand. This would neatly explain how that old Skywalker lightsaber came back into play.

If an evil Luke clone is flying Luke's X-wing, then you can imagine all sorts of scenarios where he steals Luke's legit green lightsaber, fools R2-D2, and so on. If you're an evil clone and you're trying to impersonate the real thing, the fist thing to do would be to get the correct lightsaber, right?

How likely it is? This is all good fun, but if we're being serious, this story twist feels pretty unlikely. That said, there was a lot of discussion about cloning in the finale. We're finally told that yes, Dr. Pershing is a clone scientist working for the Empire. It's pretty easy to assume he's planning on cloning Palpatine, but if the Empire wanted to keep hold of Baby Yoda long-term, the best possible plan would be to send in an evil clone Luke Skywalker at the last minute.

Because if this wasn't really Luke, then Mando will have a very good reason to be reunited with the Child in a future Mandalorian season or perhaps, a Star Wars movie. And, if Mando does take on Luke's clone, he's got the Darksaber to help him get through it. I have spoken.