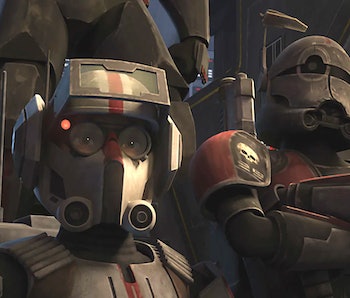 Just when you thought The Clone Wars were over, those pesky Clones are attacking all over again. Lucasfilm confirmed the next animated Star Wars TV series is a direct spin-off from the final season of The Clone Wars. The adventures of Clone Force 99 — AKA "The Bad Batch" — may date back to 2015, but it looks like the stories of these wayward Clones are far from over. That said, The Bad Batch series isn't really part of The Clone Wars, because of when the show takes place. The most interesting and exciting thing about The Bad Batch isn't the subject matter, but instead, the setting.

Here's three reasons The Bad Batch could be a much bigger deal than it seems, and why it could knock-down several canon problems that have been plaguing the Star Wars timeline for years.

Basically, The Bad Batch is going to become the A-Team of Star Wars. They're going to go off the grid, and take on weird missions week-to-week. For those hoping for more information about what was going on with Ahsoka or the surviving Jedi in the aftermath of Order 66, that news might be discouraging. But it shouldn't be, and that's because having a show set right after Order 66 is actually a great way to sew-up a bunch of loose Star Wars canon threads. For example.

3. Explore how the Republic became the Empire

In Revenge of the Sith, when Palpatine raises his arms and says "the Republic will be reorganized into the First Galatic Empire!" he gets that famous thunderous applause from the Senate. But what does that look like, specifically? It's tempting to say that Clone Troopers everywhere just start swooping down on planets and putting them under martial law like right away, but everything we know about Star Wars history tells us that's not quite right.

In A New Hope, Palpatine dissolves the Senate off-screen. Tarkin says this means that the "Regional Governors now have direct control," implying those people are Palpatine's puppets anyway. Key point: That happens 19-years after Order 66. That's a long time for the Empire to function as, well, not the Empire we know. Sure, five years before A New Hope, we see the way the Empire behaves in Rebels, but again, that's still a solid decade after Order 66. Ditto with Solo. Essentially, there are at least 10 years there where we really don't know what the Empire looked like to the public. The jump between Revenge of the Sith and the next few canonical stories is still pretty big.

2. More about the crime syndicates

Here's one thing that's pretty weird about all the major eras of the Star Wars universe: the criminal underworld feels pretty consistent. Think about it, The Phantom Menace, Jabba and other Hutts operate criminal businesses out in the open, mostly ignored by the Republic. Qui-Gon even says Tatooine is "controlled by the Hutts, which implies he can't do anything about that. Remember when Qui-Gon outright says, "I didn't come here to free slaves." Yeah, what's up with that?

During the time of the peaceful Republic, it seems like there are all sorts of planets outside of Republic influence that have absolutely terrible criminal organizations running the show. In the classic trilogy, this seems pretty much the same, including stories that take place just before A New Hope. But what happened in between?

In The Clone Wars finale, Maul sends leaders of the three crime syndicates — Black Sun, the Pykes, and Crimson Dawn — into hiding. By the time of Solo, the Pykes and Crimson Dawn seem to be doing just fine. Again, we're dealing with ten years in between Order 66 and the start of Solo, so it seems like the criminal element of the galaxy, the scum, and villainy, was seemingly afraid right after Palpatine took power. If that's true, then the members of the Bad Batch would be in a unique spot to explore this apparent dichotomy. If these guys are getting mercenary jobs, does that mean they're working with people like Crimson Dawn, or not? Essentially, the weirdest revelation here would be the following: Maybe, just maybe in the decade before Solo, the rise of the Empire accidentally reduced organized crime galaxy-wide. In other words, how do Jabba and Maul get their mobster groves back?

Arguably, the worst period of time for freedom-loving people was the height of the Empire. So roughly 10BBY (Solo) to 4ABY(Return of the Jedi). And, during this time, we're meant to believe the vast majority of people who fight for the Empire aren't brainwashed child soldiers or Clones conditioned to be loyal to the government, but instead, regular people. The events of Solo and Han's brief time serving for the Empire basically confirm this. But how did that happen? How did the perception of the Empire become so overwhelmingly positive that they were able to recruit so many soldiers? More to the point, when were the Clones phased out, and why? Based on how well Order 66 went over, it seems like making more Clones would be a good call.

Again, the members of the Bad Batch are positioned perfectly to explore all these questions. Even during the Clone Wars, the Bad Batch were ostracized from the rest of the Grand Army of the Republic. Presumably, none of the had inhibitor chips in their brains either, otherwise, it seems unlikely there would be a TV show about them post-Order 66.

The fact that the Bad Batch are running around independent in the galaxy feels like a microcosm for what must end-up happening to the rest of the Clones who still worked for the Empire. And if The Bad Batch series can fully explore how the Clone Army led to Stormtroopers, it will make so many more things about the story of Star Wars click into place.