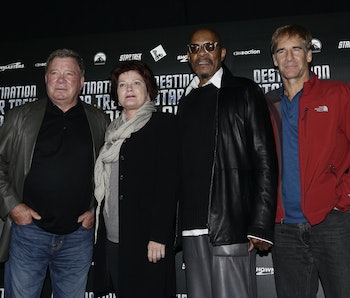 It's been a long road. A new rumor is flying around at Warp 5 that the very first captain of a starship called Enterprise will be returning to the Trek canon in some way shape or form. Take this rumor with a pinch of dilithium, but according to two outlets, actor Scott Bakula is in talks to reprise his role as Captain Archer in a new Star Trek TV project. This rumor comes as Strange New Worlds seemingly starts filming in Toronto. (Ethan Peck's Instagram was a dead giveaway.)

If Captain Archer did return, the best bet seems to be Star Trek: Strange New Worlds, the show that is both a sequel to Discovery Season 2 and a prequel to The Original Series. Here's how Bakula's Jonathan Archer could find himself back in the Final Frontier. Wild speculation ahead.

There is no confirmation from Paramount/CBS about Bakula returning as Jonathan Archer. By most metrics, the 2001-2005 prequel series Enterprise is considered the most unpopular Trek show of all time. Nevertheless, Enterprise has been given a lot of love in recent years — with tons of Easter eggs for the show in both Star Trek Beyond, and Discovery. Without the bold choices made in Enterprise, a lot of Discovery and Strange New Worlds wouldn't be possible.

The Enterprise timeline ends pretty clearly in the year 2161, in the episode "Those Are the Voyages..." Discovery Season 1 starts a full century later in 2256. In "The War Within, the War Without" Admiral Cornwell said Enterprise visited the Klingon Homeworld "almost a hundred years ago."

Is Archer alive in the 23rd Century of the Strange New Worlds era? He'd be 146-years-old, which isn't unheard of for Star Trek humans. What's more, according to slightly apocryphal data from text-on-the-screen in "In a Mirror, Darkly Part 2" Archer not only became the President of the United Federation of Planets but also died in 2245, right after he attended the christening ceremony of the USS Enterprise NCC-1701.

Then again, in the 2009 reboot movie, Scotty (Simon Pegg) mentions "Admiral Archer's prized beagle" which seems to indicate that in Kelvin Timeline, Archer was (maybe) still alive in 2258. So, Prime Archer could be alive in Pike's time, which doesn't rule out a regular appearance from Scott Bakula as the character in the timeframe of Strange New Worlds.

We still don't know when the new Michelle Yeoh spinoff Section 31 will take place. In Discovery Season 3 the Guardian of Forever said he was sending Georgiou (Yeoh) back to a point in time when the Prime and Mirror Universes were still "aligned." It's unclear if this means Georgiou will emerge before the universes diverged or if she's simply going to a time when travel between the two dimensions wasn't so tricky. Interestingly, if Georgiou land somewhere in the late 22nd Century, say, 2170 or so, it would be far enough after the end of Enterprise (20 years) but still several decades before the birth of her Prime Universe counterpart in 2202. And, interestingly, the late 22nd Century to early 23rd Century is a pretty huge period of Trek history which the legit canon has barely explored.

If Section 31 did happen some time in these missing gaps, then having a post-Enterprise Archer could make a lot of sense. Best of all, Scott Bakula could just pick-up where he left off, kind of like the naturalistic approach to Picard.

The Archer cameo may be something else

Because we just saw Leonard Nimoy's Spock in Discovery Season 3, via holographic recording, it's pretty easy to imagine all sorts of ways that a historical Captain Archer could appear in either Discovery Season 4 or Picard Season 2. Somewhat infamously, in the finale of Enterprise, Riker played out an elaborate holodeck simulation set aboard the 22nd CEntury NX-01, which included paling around with Archer. Riker jokingly referenced this specific holodeck program in the Lower Decks Season 1 finale, when he said talked about "You know, Archer and those guys."

So, when you consider that Lower Decks made several jokes about Enterprise, and also loves having zany plotlines, Captain Archer could easily return to that series. Could a Lower Decks Archer exist outside of a holodeck joke? Well, maybe. Lower Decks has yet to do a zany time travel story and considering it's an animated show, the possibilities of jumping into another part of the canon are totally on the table. In fact, Lower Decks showrunner Mike McMahan even told Inverse that doing other versions of Lower Decks in different Trek eras is totally possible: "You can do Lower Decks on a bunch of other ships and other eras."

Will Archer really return? It seems like a longshot, but if it does happen, one thing's for sure. He better bring his cute dog Porthos with him.