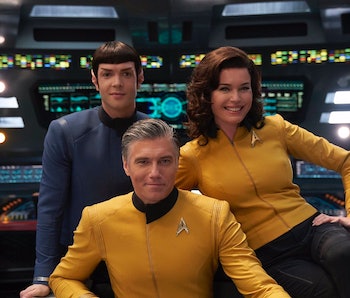 After the USS Discovery jumped to the 32nd century, the 23rd century was left to the canon of The Original Series. Or so we thought. The announcement of Strange New Worlds means Trekkies will return to the most speculated-about and murky era of the franchise; before Kirk took command of the Enterprise, when Spock still served with Captain Pike and Number One. Strange New Worlds will explore those years in a more traditional, back-to-basics episodic series.

During the Star Trek Day virtual panels, the cast and creative team of Strange New Worlds gave a few small hints about where the next Trek prequel series will boldly go, including one very shocking possible crossover. Speculation ahead.

Unlike the heavily serialized nature of Picard and Discovery, Strange New Worlds will have "close-ended" stories, which will conclude every week. Writer and co-executive producer Akela Cooper described this as "More one-off plots," while showrunner and producer Akiva Goldsman said the series will have "episodic value [with] characters stretched in a serialized quality." All the cast and writers emphasized that the characters will be impacted by the events of each episode, but Cooper also said that there will be “one plot point we will be sprinkling in." She stopped short of saying what that plot point is, but that means one aspect of serialization will actually exist in Strange New Worlds.

2. The backstory of Number One will be revealed

Rebecca Romijn and panel host Mica Burton both pointed that the character of Number One is "enigmatic," and that we still know little about her origins. Several non-canon novels have attempted to explain her background and her first name, Una — which was not established onscreen until the Short Treks episode "Q&A" — but beyond that, we don't know much. That said, Rebecca Romijn says that is all going to change in Strange New Worlds. "The writers' room has floated an idea for Number One’s backstory," she said on the panel. "I’m not going to reveal it, but it blew my mind."

Akiva Goldsman revealed that since his involvement in Discovery Season 1, he's been pushing for a show centered on Captain Pike and Number One on the NCC-1701 USS Enterprise. But, now, because Rebecca Romijn just happens to be married to Jerry O'Connell — Commander Jack Ransom on Star Trek: Lower Decks — Goldsman says he is "advocating for the crossover episode." This might seems like a joke, but on Twitter, Lower Decks actor Jack Quaid doubled-down on the idea, noting that Ethan Peck (Spock) taunted him with the possibility of a crossover at Dragon Con in 2019, and said " I for one am ALL IN for a SNW/Lower Decks crossover episode."

How would this work? Live-action Lower Decks characters? Animated versions of Spock, Pike, and Number One? Assuming this isn't a joke, any of this could be possible.