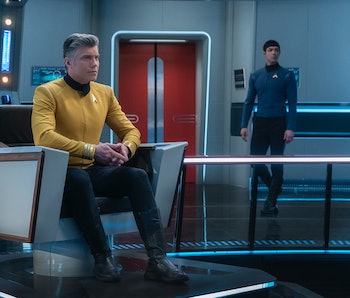 When Captain Pike, Spock, Number One, and the crew of the USS Enterprise NCC-1701 embark on new adventures in Star Trek: Strange New Worlds, the show will be a throwback to the franchise's traditional planet-of the week. This means that for the first time — ever — Strange New Worlds is poised to fulfill the promise of The Original Series, and actually depict new alien lifeforms that actually look like aliens.

In a new interview with Deadline, producer Alex Kurtzman shared this enticing description of what the next Trek spinoff will look like:

For readers of serious science fiction, one of the biggest (and oldest!) criticisms of Star Trek's portrayal of alien life is that everybody tends to have two arms, two legs, and one head. Within Trek's canon, there's an explanation for this in the TNG episode "The Chase." Billions of years ago, a bipedal alien race "seeded" the galaxy with the blueprint for various species to evolve into what we think of as "humanoids." TNG essentially argued evolution happened because some bipedal aliens wanted it that way.

That said, "The Chase" was mostly just a complicated hand-wave to help explain away the idea that aliens in Star Trek tend to look very human. The exceptions to this tendency are famous: The rock-based lifeform, the Horta, from the TOS episode "The Devil in the Dark." A tentacled shapeshifter called a Vendorian from The Animated Series episode, "The Survivor." The Gormagander Space Whale from the Discovery episode, "Magic to Make the Sanest Man Go Mad." And so on.

For the most part, when non-humanoid aliens appear on Star Trek, the franchise doesn't stay with those aliens very long, or, on less-than-stellar occasions, the non-humanoids are relegated to bug-eyed-monster tropes.

The question of why cool, creative space aliens aren't seen on Star Trek as much they should be is pretty easy to answer: For the most part, special effect technology hasn't really been in a place where Star Trek could do Arrival-style aliens every week. That's no longer the case. If Kurtzman and showrunners Henry Myers, and Akiva Goldsman keep their promise about aliens-of-the-week and planet-of-the-week, then Strange New Worlds won't really be a throwback to TOS. Instead, it will actually become what TOS wanted to be in the '60s, but couldn't.

Even at the very beginning of Trek, the show established that having aliens as part of Starfleet was normal. In "The Cage," the Trek pilot which established Pike and Number One, made the existence of Spock as a crew member a non-issue. Aliens that Starfleet was aware of weren't blowing anyone's mind, they were simply a fact of life. But the new lifeforms that the Enterprise was tasked with seeking out; those were, in theory, supposed to be truly alien and new. And yet, because of makeup technology and VFX abilities in the '60s (and the '90s!), most Trek has been stuck with aliens that mostly look like humans. Discovery has begun to move away from this. Ripper, the friendly Tardigrade who Burnham freed in Season 1 of Discovery, was space bourne lifeform that looked exactly like what it was supposed to look like — a giant Tardigrade. The special effects technology is clearly available for new Star Trek to do more non-humanoid lifeforms, and hopefully, they'll look even more exotic.

So, when Strange New Worlds arrives, it seems very possible that the next time Spock flashes his Vulcan hand salute, the alien that responds back might be saying "live long and prosper" with its tentacles.

Strange New Worlds is expected to start filming in 2021.