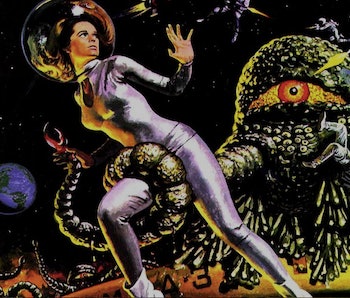 In the new science fiction film Arrival, Amy Adams must convince moviegoers that she is a crack linguist named Dr. Louise Banks, tasked with communicating with a many-tentacled alien species called Heptapods. Unsurprisingly, making us believe Amy Adams is really Louise is much easier than convincing us that Heptapods are what aliens might actually look like. Science fiction can make us believe all sorts of things, but there’s a tricky difference between something seeming realistic and being realistic.

At first glance, the aliens of Arrival are more convincing — or at least more complicated — than the extraterrestrials found in most sci-fi movies. But why? The simple answer to this is that they have both tentacles and a complex language. Plus, their language is real, even if it was made specifically for the movie. This means humans could conceivably use the logograms in Arrival to communicate, giving the alien invasion movie a sheen of plausibility.

Much older science fiction dealing with aliens (TV, film, poetry, or prose) often now feels laughable and outdated, because how can you not laugh at those stupid rubber masks in Outer Limits? But, it’s pretty important to remember that these don’t feel dated because of any contemporary advance of real science. As of now, there is no working biological field of study about what intelligent aliens would look actually look like. This isn’t to say the entire field of astrobiology doesn’t exist, it’s just that it’s primarily focused on the extraterrestrial environments where basic organisms could evolve. Wild speculation about whether intelligent aliens would have tentacles or exist as hive minds made out of gas doesn’t figure into real astrobiology.

In short: Because intelligent alien bodies have never, ever been seen, there is no real scientific case study on which to base their fictional design. Instead, the presentation of more “realistic” aliens with tentacles in science fiction is probably based on this line of thinking: Life as we know it would have evolved in an ocean. Things that live in the ocean have tentacles and seem “alien” to humans. Ergo, more “realistic” aliens would have space tentacles. And because there’s a legacy of great science fiction — like Octavia Butler’s 1987 novel Dawn — that feature complex aliens with tentacles, the many-tentacled alien motif has become code for more a more “plausible” alien.

Tentacles then, might be somewhat superficial, making the Heptapods really no more “alien” than the pointy-eared Vulcan, Mr. Spock on Star Trek. This isn’t the fault of the Heptapods, or of Mr. Spock. It’s actually just a very real limitation human creativity.

Ted Chiang’s short story “The Story of Your Life” (the basis for Arrival) finds Louise ruminating on the challenges of communicating with the aliens: “The familiar was far away, while the bizarre was close at hand,” she says. And though this is a brilliant line, it belies the opposite tendency of the physical depiction of aliens in most science fiction: We are in fact very “familiar” with the “bizarreness” of aliens who have tentacles.

In his groundbreaking 1997 meta-fictional essay/short story titled “If Lions Could Speak,” noted science fiction writer Paul Park points out that when any writer tries to “describe” an alien, that writer is probably only describing humanity through a lens. As Park writes: “The words we put into an alien mouth, the feeling into an alien heart, the tools into alien hands, what can they be but imitations of our words, feelings, tools?” In both “The Story of Your Life” and Arrival, the Heptapod aliens work in the narrative because there’s something human and relatable about them, despite their exotic appearance. No one loves this movie or short story because of the extreme “alienness” of the Heptapods. Instead, we love it because it has heart.

As Park writes, stories about aliens invariably show us something other than aliens: “When a writer conceives of an alien species, she will extrapolate what human beings would be like if they shared the alien’s morphology.” In his novel Coelestis (published as Celestis in the U.S.) Paul Park explored this as a literary conceit: The only way to write about aliens would be to imagine an alien who had been forced to be human. The story of Coelestis is all about aliens who have been coerced over the years to essentially change their species over to humanity. The novel focuses on a girl named Katherine who originally wasn’t a “girl,” because she’s not actually human. The plot then, focuses on her discovering her “alien” qualities. In this way, the dishonesty of trying to write from a true “alien” point of view is slyly subverted. “You can’t talk about the subject [of aliens] directly, or in a way that makes sense,” Park told Inverse, “Because of the logical problem in the story.”

Practically speaking, a realistic story about alien intelligence defies logic. In Stanislaw Lem’s famous novel Solaris, the basic question of bridging impossible communication gaps ends in sad failure. An intelligent alien ocean conjures up dead people from the memories of a depressed scientists in an attempt to say hello. Clearly, something is lost in translation.

But the impossibility of it all isn’t why we love stories like this. The communication with the Heptapods in Arrival is warm and touching because were are convinced — for a brief moment — that these aliens are real. The attention to detail and the idea that language is so central to the plot cements their “reality” firmly enough to make us care. But Louise’s journey with her Heptopod friends is ultimately — as all good alien stories are — mostly about her. “The alien intelligence becomes part of the landscape, something to be experienced or overcome,” Paul Park said. “It’s something to show us aspects of ourselves.”

When Louise writes the word “human” on her little dry erase board in Arrival, she’s really holding up a mirror to the Heptapods. And even if the reflection in that mirror is covered in tentacles, make no mistake, these aliens are still totally human.