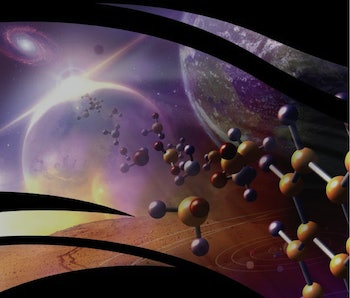 When researchers in Greenland announced the discovery of the oldest fossils of life ever found, the science community was obviously intrigued. The 3.7-billion-year-old rocks from Greenland are stromatolites, containing the fossilized remains of complex microbes typically found in shallow waters. They depict lifeforms far more evolutionarily advanced than what scientists thought possible at that point in Earth’s history.

But the implications of the findings went far beyond that of the confines of Earth — they affected the very future of astrobiology, or the search for extinct or extant extraterrestrial life.

To understand why, remember that Earth was formed 4.6 billion years ago, but it didn’t come wrapped up neatly with a bow on top. Instead, our planet was just like any other infant: volatile, violent, and unpredictable. Much of the surface was still molten lava that was cooling down, and it was getting pummeled by giant asteroids and space junk still swirling around the solar system.

From 4.1 to 3.8 billion years ago that pummeling became extra bad in a period scientists call the Late Heavy Bombardment (LHB). It’s been previously thought that the rate at which Earth was getting hit by collision was enough to obliterate any existing lifeforms and basically turn Earth sterile.

So what does a fossil of complex microbial life from 3.7 billion years ago tell us about the search for extraterrestrials? Three possibilities, actually.

In the first and most boring case, the fossils could simply be evidence that the LHB was in fact less hostile and violent that we originally imagined. Early life was actually living in a more peaceful environment than we assumed. This revelation would be fascinating for researchers unraveling the history of Earth itself, but is less relevant to astrobiology with regards to extraterrestrials.

The discovery might also mean Earth’s first organisms were able to withstand brutal environmental conditions, according to Penelope Boston, the director of the NASA Astrobiology Institute. Boston’s own work centers around the investigation of life in very unusual environments on Earth — places with extreme rates of temperatures, pressures, salt concentrations, pH levels, heavy metal concentrations, and sunlight exposures, to name a few. “Life continues to surprise us on this planet with what is able to do, so I think that’s a legitimate suggestion.” says Boston.

The biggest implications of the Greenland fossils have to do with the solar system itself. After all, there are plenty of organisms on Earth that have evolved to survive and even thrive in hellish conditions not too different from Mars, or “ocean worlds” like Jupiter’s moon Europa or Saturn’s moon Enceladus. It’s no longer insane to think extraterrestrials might be armed against the pressure of a subsurface geyser, or withstand UV rays that would fry our own faces off.

The new fossils might be particularly encouraging for astrobiology research on Mars. Boston says the stromatolites are a pretty good analogue for trying to hunt for early lifeforms on Mars. We know Mars was once a warmer planet teeming with lakes and other vast bodies of water. Just a few weeks ago, Mars researchers found an extensive network of ancient riverbeds dating back to 4 billion years.

“We don’t see prolific life on the surface today, but there might have been in the past,” John Rummel, a former senior scientist for astrobiology at NASA and current professor of biology at East Carolina University, tells Inverse. Rummel points to the southern highlands of Mars as an “interesting prospect” for astrobiological research that could possess signs of biological activity.

On the other hand, the fossils discovery could mean the first organisms perhaps aren’t as resistant than we thought, but that they simply evolved extraordinarily fast in just a couple hundred million years after the LHB, flipping the script on the notion that the habitability windows for planets in the universe are short and narrow.

The evolution of life is thought to have sped up and shaped the transformation of Earth into a more habitable world itself, like a positive feedback loop: As organisms became more complex, they developed biological mechanisms that consumed carbon dioxide and generated free oxygen — which helped give rise to aerobic lifeforms that soon became irrevocably essential to natural processes like the water cycle or nitrogen cycle. These processes are fundamentally tied to life, and vice-versa.

However, some circles of astrobiology have recently put forth an idea that if a planet is going to establish and maintain a stable version of habitability like Earth, it needs to get those complex lifeforms to evolve fast … which means the habitability window is short, and that’s probably why we haven’t found extraterrestrials yet.

But the new fossils could be a sign that habitability windows actually aren’t so narrow, because organisms are capable of evolving faster than we imagined. In fact, the findings are tremendously encouraging for investigating exoplanets orbiting stars we’ve originally assumed were too young to host life, or larger stars that burn out much faster than smaller ones.

There are too many unanswered questions so far about the fossils that prevent us from making any conclusions. Aditya Chopra, an astrobiology researcher from Australian National University in Canberra, recently authored a study that supports the idea of small habitability windows. “We don’t know yet if these 3.7-billion-year-old microbial communities were complex and widespread enough to modulate the abundance of greenhouses on a planetary scale to counter abiotic feedback cycles leading to runway heating like on Venus or cooling like on Mars,” he tells Inverse.

Boston rejects the idea of narrow habitability windows for life, but doesn’t believe any scenario is more plausible than the other. “I think that’s a very Earth-centric model,” she says. “When I look at the staggering number of stars in our galaxy, the number of planets we’ve discovered and continue to discover, we just have the numbers on our side. It may be that in any given solar system, there are only one or two planets that could be life-bearing. But when you look at the universe as a whole, I think that it’s probably a very common phenomenon.”

Boston emphasizes that habitability and the search for organisms past or present on other worlds need to be considered on a case-by-case basis. But there’s never been a better time to be an astrobiologist: Chopra thinks the Greenland fossils are further proof of how essential interdisciplinary research is to the search and understanding of extraterrestrial life. Boston concurs: It’s so magnificent that we live in an era that Earth-shaking science is being produced at such an amazing pace.

“It’s just stupefying. All of these things are just a perpetual joy.”