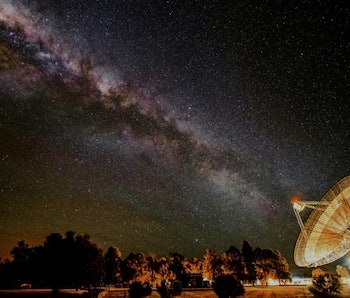 Ever since the possibility that extraterrestrial life exists entered the minds of humans, we’ve looked out in space for signs of it. Scientists from the Australian National University’s Research School of Earth Sciences think the reason we haven’t found anything might be because all the aliens went extinct.

Yeesh, that’s grim. But it actually makes sense when you think about it. In a new study published in the journal Astrobiology, Aditya Chopra and his colleagues do a good job detailing something already well established but not necessarily articulated enough among the scientific community at large: Organic life is more delicate than a daffodil in a snowstorm.

Habitable planets might be pretty common, and primitive life might find a way to come into existence pretty easily on many of those worlds. Unfortunately, the window of habitability on those planets is probably extremely short — too short to allow that life to evolve fast enough where they can survive in the long run.

“Early life is fragile, so we believe it rarely evolves quickly enough to survive,” Chopra said in a press release. “Most early planetary environments are unstable.

“To produce a habitable planet, life forms need to regulate greenhouse gases such as water and carbon dioxide to keep surface temperatures stable.”

It’s worth placing this study in the context of the Fermi Paradox: the contradiction between high probability that there’s alien life and the lack of evidence that they exist. Through this paper, Chopra and his colleagues are basically putting forth an argument that helps reconcile the paradox by saying many habitable planets probably exist and there’s a good chance a lot of these worlds are home to life. It’s just that life washes out too quickly.

One solution to the Fermi Paradox is the Great Filter hypothesis, which posits that some kind of obstacle that permeates throughout the vast majority of the universe is responsible for preventing life from developing. Among a list of nine different evolutionary steps, at least one must be improbable enough as to create a bottleneck for evolution.

The question is, which steps are the limiting factor? The early ones where single-celled life is birthed, or the late ones where complex life breaks through? In the new paper, the authors say neither — the limiting factor, in their “Gaian Bottleneck Hypothesis,” are greenhouse gases that can keep a planet’s surface temperatures moderate and stable enough to support life. If a planet cannot maintain greenhouse gas levels optimal to organic life, any life on that planet either needs to play an integral role in helping to maintain geo-climatic stability (as life here on Earth does), or needs to evolve and adapt to harsher conditions. If it can’t do either, it will perish.

With such a short window of time in which a planet is not too hot and not too cold, but just right, primitive organisms might not stand much of a chance to really get their shit together and evolve fast enough to survive in the long run.

“Extinction is the cosmic default for most life that has ever emerged,” the authors of the study write.

Case in point: Mars. We know Mars once had a pretty robust atmosphere and vast oceans and lakes covering its surface. And then it all went kaput very quickly, and the planet transformed into a cold wasteland.

If there was life on Mars, it didn’t evolve fast enough to adapt to changing conditions, or it didn’t do enough to help stabilize the planet’s climate and atmospheric composition.

Don’t get too bummed out. Other scientists are much more optimistic we’ll find E.T. someday soon. Read our interview with SETI researcher Seth Shostak if you’re interested in hearing a more positive message.