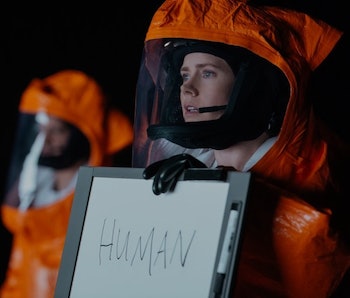 In most science fiction films, the language barrier between humans and aliens is either entirely ignored or quickly overcome with a bit of techno-exposition. Arrival explores what happens when there is no protocol droid or Babel Fish handy. A tiny narrative hurdle in other movies made into the central focus gives us a process-driven film made about the developments that make epic adventures possible.

Director Denis Villeneuve’s movie, set during a mysterious alien fleet’s visit to Earth, devotes itself to the minutiae of earthling-alien communication. Instead of a fighter pilot or witty space cowboy, its hero is grief-stricken linguistics professor Dr. Louise Banks (Amy Adams). She’s charged with decoding the language of gigantic heptapod alien creatures, working closely with the mysterious visitors to establish a diplomatic dialogue. The catch: The aliens’ written tradition is nothing like anything ever produced or recorded by man, consisting of insanely detailed symbols arranged in unfamiliar structures. In the short story on which the film is based, Ted Chiang’s “Story of Your Life,” Banks suggests they resemble “fanciful praying mantids” combined to form an “Escheresque lattice.”

As hard as it was for Banks and crew to decode it, it was even harder for those with the production assigned the responsibility of designing such an unprecedented language.

“It was a long, arduous process for me,” Eric Heisserer, the film’s screenwriter, told Inverse. “I started trying to describe the language textually in the script, but I was dissatisfied with my own descriptions. I was complaining to my wife about that at dinner, and she challenged me to draw for her what it looked like. So I drew a circular symbol to connote the nonlinear orthography of the heptapods, and I added some accents and circles around the symbols. It was the first time I put visual things in a screenplay.”

Chiang offered a few building blocks for Heisserer: The logograms combine together to create longer sentences and deeper meanings. The language has no written punctuation, or even word order, with inflections indicated by varying a certain stroke’s curvature or thickness, among other variables. Subjects are modified by verbs and tense that are indicated by adding strokes in different orders and angling logograms in different directions, making it exhausting to contemplate, let alone longhand.

Heisserer’s father was a Classics professor fluent in a handful of languages, and childhood memories of bilingual flashcards inspired the screenwriter to refine, as best he could in the script, the look of the language and how it was discussed; he referred to Elvish quite often, and referenced his father’s teachings. Then his rough ideas were sent along to designer Patrice Vermette, who was charged with fully realizing the new language, which would be prominently featured throughout the film. Vermette is quick to admit that he went off the deep end in his pursuit of creating a language out of whole cloth.

After deciding that the complicated logograms would be produced by bursts of cloudy squid-like ink (it’s on a simple digital screen in the story), Vermette commissioned five different proposals for alien fonts. None of them satisfied him, but he was taken with one of fifteen different options his wife produced in one feverish overnight painting session. Villeneuve approved it and the team got to work refining the mechanics of the language: how specific curves, squiggles, and blots could mean so many different things.

“There are some blobs, and if you mix them together, if you put them in a circle, it’s like writing a language,” he said. “It’s not easy to understand, but at one point, after looking at them, looking at the individual portions, you start to see what’s repeated in another logogram. You put two and two together and start making sense of them. These logograms represent words, they represent sentences, and feelings. It’s a total universe within each.”

Because each logogram is made up of so many parts, they had to figure out how to find a way to break each one down, to create some sort of word order for the human mind; in the story, the order in which they are written helps determine meaning, but they never fully explore that, necessitating a more conventional explanation. “Louise divides the logograms into twelve parts,” Vermette said. “We started with sixteen, and then thirty-two, and divided, divided, divided. From there, you can create long sentences and short sentences.”

Inventing a new language for a fictional story is nothing new; there are plenty of super-fans who speak Elvish and Dothraki. But those are linear languages, making them at least familiar to human readers. Given that linear wasn’t going to work, it would have been easier to design an “artistic” language (“artlang” to linguists), one without consistent meanings or grammar, but Vermette wouldn’t condescend to that. His insanity compelled him to make it comprehensible for anyone with a lot of time on their hands and a passion for linguistics.

“We created a dictionary, a logogram bible,” he said. “There’s 71 used in the final version of the movie, but we created over 100. They all make sense.”

Throughout the film, news reports outline the attempts that other teams are making to communicate with aliens that have parked above foreign countries. Dr. Banks’s team is focused on deciphering the complicated logogram, but other groups take far different approaches.

“We found inspiration when speaking with language experts and we explored alternate ways of communicating with the alien race,” Heisserer said. “When we landed on the Chinese group, our language expert said it would be nigh impossible for anyone to try to teach an alien race or even just a foreigner Mandarin in a compressed time. There are thousands of unique symbols and interpretation is tough. We landed on mahjong as a model of communication that would be an alternative to them learning Mandarin. The Japanese brought in cello players and played music. South American sites attempted sign language.”

It was all trial and error, both for the production team and the desperate crews in the film. Mahjong, because it has clear winners and losers, fostered a more competitive — and thus dangerous — relationship between man and alien visitor. Music only works if you’re hearing things on the same frequency, and can appreciate the difference between words and song. Ultimately, successful communication came down to the painstaking work of sharing a language. And now, if aliens really do arrive on earth, NASA can call in Vermette and Heisserer to help them talk it out.

More like this
Entertainment
Sep. 26, 2022
Vesper is a breathtaking sci-fi warning about our real-life future
By Eric Francisco
Culture
14 hours ago
You need to watch Spielberg’s most divisive sci-fi movie on Amazon Prime ASAP
By Robin Bea
Culture
Oct. 1, 2022
You need to watch Hugh Jackman’s most underrated sci-fi thriller on HBO Max ASAP
By Dais Johnston
Related Tags
Share: