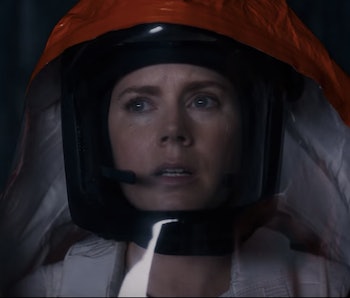 The first full trailer for Canadian filmmaker Denis Villeneuves latest thinking person’s sci-fi spectacle just dropped, and it sure looks gorgeous. Arrival pits Amy Adams’s linguist character, Dr. Louise Banks, against a bunch of aliens that just want to talk things out – and explain why they showed up unannounced on Earth in their weirdly simple spaceships that look like giant, evil Apple products. The only problem ? they’re shy about meeting humans.

As Forest Whitaker’s military character says, “Priority one: What do they want, where are they from?” But also, why so mysterious, and what do they have to hide? Maybe it’s because all signs point to them being gigantic alien cephalopods with seven tentacles that would rather play coy word games behind white mist than come out and give Adams some dap.

The trailer gives us millisecond-long glimpses at the aliens that Adams attempts to communicate with, and even though Arrival is the type of movie that’s about the human characters more than the aliens themselves, it’s still fascinating to stop for a moment to see Villeneuve’s portrayal of first-contact play out in the trailer.

The tone of Arrival is an interesting one; it matches the scientific whimsy of Contact with the invasion schlock of Independence Day. That approach leads you to believe the actual alien reveal could go one of two ways: Villeneuve doesn’t show the aliens in full, or we’ll get one or two major looks at the aliens and that’s it.

In the meantime let’s take a look at all the alien octopuses the trailer has to offer.

It looks like the alien ship, or “shells” as Whitaker’s character says, somehow attracts the atmosphere around it. It makes for some weird science and beautifully surreal shots.

The alien itself is so vague in this shot, but the similarities to the tripods in War of the Worlds are unmistakable, and probably not a coincidence.

This is probably just an alien arm considering the view of the big guy above. The scene is bizarre, considering Adams’s lethargic reaction to an alien species trying to give her a high-five, or in this case a high-seven.

Once Adams finally gets around to communicating with the aliens they use the ship’s mist as a kind of dry erase board for their linguistic pictographs. Since these are an advanced species we’re talking about, they don’t need no sticking pens or pencils, they just use some kind of squid ink to say, “O shit waddup” to the earthlings.

Arrival will be released in theaters on November 11.