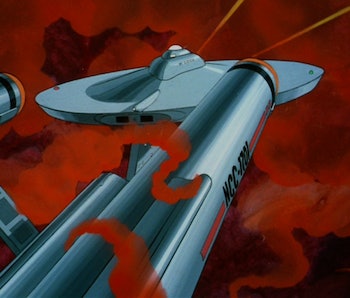 We know most of the species in the Star Trek universe are bipedal humanoids because they all share a common ancient alien ancestor. The non-humanoid creatures are rarer, but in a possible future animated Star Trek, really far-out aliens —with no resemblance to humans — could rapidly become more common.

George Takei recently told IGN why 1973’s Star Trek: The Animated Series was not “one of [his] favorites.” Essentially, it’s all because there weren’t enough cool alien species.

“I thought when we began The Animated Series we would have a wonderful opportunity to really explore science fiction,” Take said, pointing out that because most filmed sci-fi requires human actors, the extraterrestrials in stories are mostly limited to “anthropomorphic alien beings.” In the grand scheme of filmed science fiction Star Trek is hardly alone in this aliens-who-look-too-human problem. But Takei is right in pointing out that an animated version of the show wouldn’t have to be as beholden to terrestrial-looking creatures. To be fair, the animated series probably featured more exotic aliens than any other Star Trek.

The Animated Series gained new Enterprise crew members who were aliens: Arex the three-armed navigator, and M’Ress, the cat-person communcation officer. But cat-people didn’t stop there! Novelist Larry Niven brought his cat-like Kzinti over from his books and into the episode “The Slaver Weapon.” Meanwhile David Gerrold’s episode “Bem” featured a humanoid-looking alien, who was really a “colony creature”: his arms and head weren’t necessarily the same person.

But these aliens are a far-cry from truly speculative beings like the rock alien “the Horta” from the classic episode “The Devil in the Dark.” There was also a gaseous cloud alien from “Obsession” and even a space-dwelling star-baby in The Next Generation’s “Galaxy’s Chid.”

Takei is basically right though: in most of Star Trek, the new lifeforms and new civilizations Starfleet is ostensibly looking to find are rarely all that interesting at least from the perspective of hard science fiction. While the in-universe explanation that everybody shares a common ancestor is somewhat elegant from a metaphoric perspective, its tends to create aliens who are mostly Bug-Eyed-Monsters. Historically, Star Trek has had a rocky relationship with the trope of “BEMs.” The aforementioned animated episode “Bem” was obviously an attempt to mock the old science fiction cliche of presenting aliens as human-beings inside of monster-suits.

But the tendency to depict alien life that mostly resembles monster-ish aliens from existing science fiction continues to pervade even newer iterations Star Trek. Presuambly, it is really hard to design an alien in the real world that wouldn’t need to rely on a human performance. But another brand new animated Star Trek wouldn’t have this problem. While talks of a new animated series have surfaced —and some fans have even made their own— there are no plans right now for Star Trek to return to animated form. Still, considering the advances in CGI, there’s every hope that the impending live action show —Star Trek: Discovery — could animate truly imaginative non-human, and deeply speculative science fiction lifeforms.