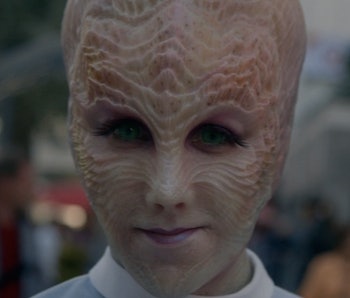 The strange new lifeforms of Star Trek Beyond actually got way stranger and more diverse than anyone even realized. Turns out, there were over 50 distinct aliens species appearing in Beyond, and all of them were brand new to the Trek universe.

On the recently released digital iTunes version of Beyond there’s a new special feature called “New Life, New Civilizations.” In it, SFX Makeup Designer Joel Harlow reveals that he and his team decided to create 50 different new aliens in honor of “the fiftieth anniversary of Star Trek.” Co-writer Simon “Scotty” Pegg mentions that he felt you can’t “get enough” different aliens on screen in a Star Trek movie. While a lot of these different aliens were glimpsed for an instant on Starbase Yorktown, many others were also members of the crew of the Enterprise.

The brief documentary not only shows off the sheer volume of new background aliens — seriously, counting all of them still seems impossible — but also describes how important some of the bigger alien characters came to be.

Idris Elba’s villainous Krall for instance, was intentionally created as an “amalgamation” of the different other alien species which he absorbed. So, not only did Harlow and his team create a bunch of new aliens, they then had to figure out how to pour all those different species into Krall, too.

While the existing Star Trek films are required to continue to give familiar characters like Spock of Vulcan or Scotty’s good friend — the tiny green Keenser — the sheer amount of new aliens creatures in Beyond is totally staggering.

Sure, Star Trek’s basic message includes tolerance and the idea of creating hope in a future universe where thousands of races all get along, it’s still nice to see that in Beyond, the Trek universe knows how to put its money where it’s 50 alien mouths are and gave us an endless stream of extra cool extraterrestrials.