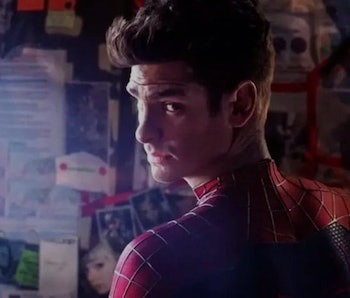 It’s long been rumored that Andrew Garfield and Tobey Maguire are both in Spider-Man: No Way Home. While Marvel and Sony have held off on confirming their rumored roles in the film, an increasing number of leaks and confirmations seem to suggest that the two Spider-Man actors will, indeed, appear in the upcoming movie.

Assuming Garfield and Maguire are actually in the film, it’ll be the first time in history that multiple live-action Spider-Men have appeared on-screen together. That alone makes their rumored involvement in No Way Home something worth speculating about, especially considering how different these two versions of Spider-Man are from Tom Holland’s character in the Marvel Cinematic Universe.

With all that in mind, here’s everything you need to know about Andrew Garfield’s rumored role in Spider-Man: No Way Home — from what early leaks say his alleged appearance will entail to some key differences Marvel fans should be aware of between his Peter Parker and the versions played by Tobey Maguire and Tom Holland.

When it comes to Andrew Garfield’s role in Spider-Man: No Way Home, nothing has been officially confirmed yet, including whether or not he’s actually, you know, in it. That said, several Marvel leakers with fairly strong track records have posted details about Garfield’s role in the film.

For starters, early rumors and leaks suggest that both Garfield and Maguire’s Spider-Men will arrive in the Marvel Cinematic Universe as a result of the same botched spell that brings villains like Alfred Molina’s Doc Ock and Willem Dafoe’s Green Goblin into the film. Additional rumors allege that Maguire and Garfield will show up to help Tom Holland’s Peter Parker and Benedict Cumberbatch’s Doctor Strange after the villains have already appeared.

Other reports say Garfield’s Spider-Man will have a notable confrontation with Jamie Foxx’s Electro, which would make sense given their history together. However, one of the most popular No Way Home rumors purports that it’ll be Garfield’s Peter Parker who saves Zendaya’s MJ from the deadly fall seen in the film’s most recent trailer.

If true, it’ll give Garfield’s Spider-Man the chance to save No Way Home’s MJ in a way he failed to save Emma Stone’s Gwen Stacy in 2014’s The Amazing Spider-Man 2.

What is Andrew Garfield’s Spider-Man backstory?

Sony’s Amazing Spider-Man films attempted to give Andrew Garfield’s Peter Parker a much more complicated backstory than we got with either Tobey Maguire or Tom Holland’s versions of the character. The results were, as many already know, pretty mixed.

In specific, the two Amazing Spider-Man films gradually revealed that the parents of Garfield’s Peter were murdered as part of an OsCorp conspiracy. Peter’s father, Richard Parker (Campbell Scott), secretly used some of his own DNA when creating the company’s genetically altered spiders, and tried (unsuccessfully) to abandon OsCorp after refusing to help the corporation use his research to create new biological weapons.

It’s a grand, all-encompassing conspiracy that essentially reveals only a member of the Parker bloodline could be given superhuman powers by one of OsCorp’s genetically altered spiders. Of course, that’s exactly what happened when Garfield’s Peter got bit by one of the spiders in 2012’s The Amazing Spider-Man.

How is Andrew Garfield’s Spider-Man different from Tom Holland's?

When it comes to their powers, Andrew Garfield and Tom Holland’s Spider-Men are pretty similar. They’re both incredibly strong and agile, and both created web-shooters using their own intellect.

However, it’s worth remembering that, in addition to carrying guilt over his uncle Ben’s (Martin Sheen) tragic demise, Garfield’s Peter also blames himself for the demise of Stone’s Gwen Stacy and her father, George Stacy (Denis Leary), both of whom perished while helping him. As a result, Garfield’s Peter holds onto far more guilt and grief than either Tobey Maguire or Tom Holland’s.

All in all, Garfield’s version of the character is weighed down by a considerable amount of emotional baggage. With Sony cutting the Amazing Spider-Man series short, the character’s emotional arc remains unfinished as well.

Hopefully, his appearance in Spider-Man: No Way Home will bring catharsis and resolution to Garfield’s on-screen journey. That’s assuming, of course, he actually is in No Way Home.