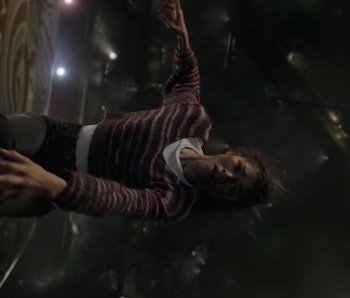 Is MJ going to die in Spider-Man: No Way Home? The film’s second trailer, officially released online Tuesday night, certainly wants you to think she will.

The character (played by Zendaya) is last seen in the second Spider-Man: No Way Home trailer falling off a scaffolding — leading Peter Parker (Tom Holland) to dive into the air after her. It’s a tense moment in a trailer full of them and one that has gotten Marvel Comics fans speculating online about what MJ’s fate in No Way Home will ultimately be.

With that in mind, one leading fan theory speculates that Zendaya’s MJ will not die in Spider-Man: No Way Home and that it won’t be Tom Holland’s Peter Parker who saves her either.

MJ’s Rescuer — Many Spider-Man fans were quick to note online how MJ’s fall in the No Way Home trailer is constructed and edited in a way that feels intentionally reminiscent of Gwen Stacy’s (Emma Stone) death in 2014’s The Amazing Spider-Man 2. The similarities between the two scenes have led some fans to speculate about the surprising and moving way MJ’s fall will play out in Spider-Man: No Way Home.

In specific, many fans now believe that Tom Holland’s Peter Parker will fail to reach Zendaya’s MJ in time in No Way Home and that it’ll be Andrew Garfield’s Spider-Man who saves her before she hits the ground. If so, the scene’s similarities to Gwen Stacy’s death in The Amazing Spider-Man 2 will take on a whole new, heartbreaking meaning.

A Full-Circle Moment — The Amazing Spider-Man 2 is far from a perfect superhero film, but its take on the death of Gwen Stacy is one of the most moving scenes that the genre has ever seen. The emotional fallout from her death is also something that was never totally resolved for Garfield’s Peter Parker, with Sony deciding to partner with Marvel and reboot the franchise just a year after The Amazing Spider-Man 2’s release.

Having Garfield’s character be the one to save Zendaya’s MJ from her deadly fall in No Way Home could, however, give his character the emotional resolution he never actually got. It’d provide Garfield’s Peter the chance to save MJ in a way he failed to save Gwen and, therefore, spare his alternate self from experiencing the same heartbreak that he did.

Beyond that, making Garfield’s Peter the one who saves MJ would be an effective way of cementing No Way Home as not just a crossover event film but also the last chapter that binds all three of Sony’s live-action Spider-Man franchises together.

The Inverse Analysis — On a narrative level, Andrew Garfield’s Peter Parker being MJ’s savior in Spider-Man: No Way Home works on multiple levels. It’s a legitimately surprising way for the action sequence to end. It’s also an effective way to keep audiences on the edge of their seats while functioning as both a callback to The Amazing Spider-Man 2 and a moving conclusion to the emotional arc Garfield’s Spider-Man first began in 2012.

In other words, consider this one No Way Home fan theory we hope turns out to be true.