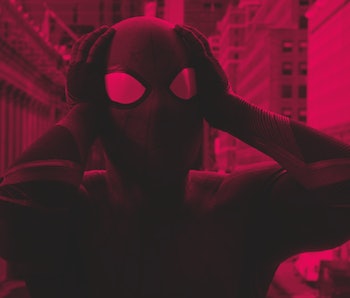 Spider-Man: No Way Home is undoubtedly one of the most pivotal movies of Marvel’s Phase Four, but its studio are having a hard time preventing the film’s secrets from leaking online.

That’s been the case since the comic-book blockbuster started casting its key roles, with early reports revealing the involvement of actors like Alfred Molina, Willem Dafoe, and Jamie Foxx.

However, while Marvel and Sony have essentially confirmed several of the film’s long-rumored villains, the two studios (and everyone involved in No Way Home) remain tight-lipped about Andrew Garfield and Tobey Maguire’s alleged involvement.

Unfortunately for Marvel and Sony, a new pair of leaked photos add further legitimacy to claims that Garfield, Maguire, and Charlie Cox appear in No Way Home.

The Leaks — On Monday night, YouTuber John Campea shared what appears to be two leaked images from Spider-Man: No Way Home.

The first shows Tom Holland, Tobey Maguire, and Andrew Garfield’s Peter Parkers all standing together on a platform overlooking a body of water, with their Spider-Man suits on and masks off. The second image, meanwhile, shows Holland’s Peter Parker sitting at a dinner table with Marisa Tomei’s Aunt May, Jon Favreau’s Happy Hogan, and Charlie Cox’s Matt Murdock.

The tweets containing the images were later deleted by Campea, who now claims that the images were photoshopped and are fake. However, a number of reliable Marvel leakers have made statements and tweets that appear to say the opposite — that the photos tweeted by Campea were, in fact, real.

Take all of this with a grain of salt. Until Spider-Man: No Way Home is released in theaters, or these shots are officially shared by Marvel and Sony, there’s no way to know the images are legitimate or not.

Three Spider-Men walk into a bar — From a story perspective, there’s not much that can be said about the image of Holland, Garfield, and Maguire all standing together.

One can assume that — if the image is real — it’s from a scene near the end of Spider-Man: No Way Home, when the film’s three Peter Parkers all team up to try and stop its numerous multiversal villains from continuing to wreak untold chaos, but the image itself doesn’t offer much more than that. Bascially, it’s just further reason to suspect Garfield and Maguire are in No Way Home, no matter how much the actors (and Tom Holland) say they aren’t.

The image featuring Charlie Cox, however, is more interesting, because it seems to be taken from a scene that Tom Holland himself recently teased.

During a recent interview, Holland talked about an “amazing” scene in Spider-Man: No Way Home between his Peter Parker, Tomei’s Aunt May, Favreau’s Hogan, and a fourth, unnamed character. Holland teased that the scene is four people sitting at a table talking about what it means to be a hero. Initially, we speculated that the scene’s fourth, mystery participant was Tobey Maguire’s Peter Parker, but these new images suggest that it could actually be Cox’s Matt Murdock/Daredevil.

The Inverse Verdict — Rumor after rumor —and leak after alleged leak — have claimed that Andrew Garfield, Tobey Maguire, and Charlie Cox will all appear in some capacity in Spider-Man: No Way Home.

As a result, Marvel fans all seem convinced that the three actors are in the upcoming film, despite the studios behind it releasing absolutely nothing to suggest that they will be. That means moviegoers are either going to be seriously let down when they see Spider-Man: No Way Home in theaters next month, or utterly unsurprised by the film’s biggest moments.

For now, these images, whether legitimate or not, will likely only make some Marvel fans even more confident about the alleged casting reveals in Spider-Man: No Way Home.