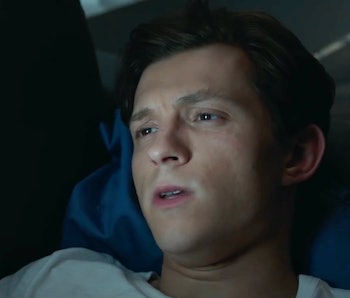 Spider-Man: No Way Home is set to explore the multiverse in a way that no other Marvel Cinematic Universe film has up to this point.

The film promises to feature not only characters from the previous two Tom Holland-led Spider-Man films, but also ones from Sony’s past live-action Spider-Man film franchises. That includes Alfred Molina as Doc Ock and, if rumors are to be believed, Andrew Garfield and Tobey Maguire as their respective iterations of Peter Parker.

In other words, No Way Home has the potential to be the first-ever live-action Spider-Verse film. That in turn means it could introduce versions of Spider-Man yet to be featured on the big screen — including one who shares a very interesting link to Peter Parker in the comics.

The Theory — While Andrew Garfield and Tobey Maguire remain unconfirmed cast members of No Way Home, Marvel fans are certain that the two actors are in the film. That means the upcoming MCU film will,indeed see Marvel Studios and Sony teaming up to offer their shared take on a live-action Spider-Verse story.

Many Marvel fan theorists speculate that the film will feature appearances from other web-slingers from the Marvel comics, including Miles Morales and Miguel O’Hara. But what if Spider-Man: No Way Home also introduces Ben Reilly a.k.a. The Scarlet Spider?

Introducing the Scarlet Spider — In the comics, Ben Reilly is a clone created by the Jackal from Peter Parker’s DNA and forced, at first, to fight Peter. That confrontation doesn’t go particularly well for the Peter Parker clone, who spends several years after the fight living in exile. While away, the character suffers personal losses and traumas, eventually being pulled back to New York by word of Aunt May’s declining health.

Once there, Ben and Peter quickly do away with any lingering resentment. Together, the pair begin to fight crime throughout New York, with Peter still operating as Spider-Man and Ben taking on the mantle of the Scarlet Spider. In the years that follow, Ben even goes on to pose as the original Spider-Man. The character has been KIA and brought back to life multiple times throughout his comics existence — to such a point that entire storylines have been dedicated to his history of resurrections.

With all that said, should a version of Ben Reilly be introduced via some multiversal means in Spider-Man: No Way Home, the character’s presence could give Marvel Studios and Sony Pictures freedom to do some very interesting things in their respective cinematic universes.

More to the point, the introduction of Ben Reilly, a clone of Peter Parker, would allow Sony to use Tom Holland as Spider-Man in both the MCU and in its own growing Spider-Man cinematic universe. How? Holland can play Peter Parker in one world, and Ben Reilly in another.

That’s a wild idea, but an exciting one. Not only would it allow Marvel and Sony to maximize Tom Holland’s current run as Spider-Man, but it’d also give the actor the chance to play two on-screen web-slingers. Most of the time, that’d be a difficult narrative trick to justify, but with Spider-Man: No Way Home already set to introduce different versions of the same character, the chance to use Ben Reilly in this way has never been more readily available.

The Inverse Analysis — Of course, there’s no way of knowing for sure what the full extent is of Marvel and Sony’s Spider-Verse plans. For all we know, the two studios may not have any plans to use Spider-Man variants like Miles Morales, Miguel O’Hara, or Ben Reilly in live-action. That’d be disappointing, but it’s a legitimate possibility that we shouldn’t forget.

But, assuming that Marvel and Sony are planning on introducing live-action versions of Spider-Man who aren’t named Peter Parker, we’re here to suggest that Ben Reilly be one of them.

The character is a compelling and beloved Spider-Man variant in the comics, one more than worthy of being brought to life. Plus, it’d give the two studios carte blanche to web-sling away into a wide-open future.