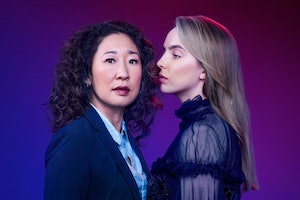 picks for fans of spies, thrills, and women being awesome

Escapism is important right now, and there's no better way to escape than watching something that makes your heart race. The latest season of Killing Eve is providing a rush of adrenaline for many fans, but what is there to watch between episodes of Season 3? If you're all caught up on the jetsetting cat-and-mouse adventures of Eve and Villanelle but still craving more, these 8 shows will feed your need for thrilling adventures and intricate conspiracies.

The Night Manager is a John le Carré adaptation boasts a cast including Tom Hiddleston, Hugh Laurie, and Elizabeth Debicki. Olivia Colman steals the show as intelligence officer Angela Burr, who pulls off an effortless performance while pregnant with her third child.

Orphan Black is the original BBC America conspiracy hit with a list of female leads longer than your arm. Most of them are played by Tatiana Maslany, whose wide range is stretched to its limits as she plays the members of the Clone Club as they try to uncover the reasons for their existence. It's thrilling, it's heartbreaking, and it's just confusing enough to get your attention.

Aside from Maslany's acting differences between the different clones, the costuming, hair, and makeup carries so much emotional weight. It may be a small detail, but when so many identical characters are involved, those efforts go a long way.

Not only does Bodyguard keep the Britishness, the sexiness, and the cat and mouse chase of Killing Eve, it also takes a shocking turn halfway through that's very reminiscent of Killing Eve's unpredictable plot. Richard Madden, after his Red Wedding exit from Game of Thrones, takes up the role of David Budd, an ex-soldier assigned to the security detail of Home Secretary Julia Montague.

What follows starts as a star-crossed romance, but through a number of shocking turns transforms into a story of how politics affect regular people, PTSD, and vigilance. It all culminates in a phenomenal final episode that will make you forget to breathe due to the suspense.

Killing Eve is unique in that its head writer changes each season to a different female screenwriter. Season 1 had Fleabag wunderkind Phoebe Waller-Bridge at the helm, Season 2 switched to Promising Young Woman writer/director Emerald Fennell, and for Season 3 playwright Suzanne Heathcote took over. This baton-passing method not only gives new female writers a platform, it frees up those who came before.

Therefore, Waller-Bridge was free to executive produce Run, a comedic drama series following two college exes as they run away from their lives together. It starts off as a passionate will-they-or-won't-they, but the end of the third episode revealed a little more intrigue to the plot. With the show still airing, there's no telling where it could go, but odds are it will be unexpected.

This Cold War spy drama starring Matthew Rhys and Keri Russell is mainly a show about Soviet spies living undercover in 1980s DC, but it adds another layer as a story of working parents trying to find a balance between their marriage and their work, even if that work is trying to destroy the United States from the inside.

The show's biggest selling point is the raw chemistry between its two leads, who started a relationship over the course of the show and are still together to this day. Add to that a recurring character from the endlessly endearing Margo Martindale and you've got a spy thriller that's just a joy to watch.

Miss Sherlock takes one of the greatest characters in the Western canon, Sherlock Holmes, and transforms him into a smart-mouthed Japanese woman. This breathes fresh life into the classic detective stories, looking at them not only from a gendered lens but from a cultural one as well. The unassuming Watson character, Dr. Wato, deals with her own past providing medical aid in Syria as she assists her new housemate with cases.

Parallels can be drawn to BBC's Sherlock series, but the show really has much more in common with Killing Eve, even if it seems more low-key. The Season 1 finale Moriarty reveal takes the entire series to a totally different level and will leave fans clamoring to rewatch.

Killing Eve star Jodie Comer made a name for herself in this BBC drama, detailing a girl's return from captivity and how she returns to real life. Just like Killing Eve, Thirteen had a female creative team, and carefully and delicately told the story of what happens after trauma. It's not the easiest thing to watch, but the emotions are raw and real.

Seeing Jodie Comer as a 26-year-old returning to the life she left when she was 13 is certainly a change from the conniving Villanelle, but it's a testament to the acting power she holds. She can be an assassin, or she could have a heartfelt conversation with her childhood crush.

A le Carré adaptation just like The Night Manager, The Little Drummer Girl captures a lush classic espionage story with Florence Pugh in the lead role alongside Alexander Skarsgård and Michael Shannon. Pugh plays Charlie Ross, a young actress who is recruited in 1979 to infiltrate a Palestinian terrorism plot. This show is a bit more by-the-book than the thoroughly modern story in Killing Eve, but the roots are there.

What sets this miniseries apart from other Carré adaptations is the direction. The Little Drummer Girl is directed by Park Chan-Wook, the iconic Korean director of thriller classics like Oldboy and The Handmaiden. He has a specific way of presenting dread and suspense that's impossible to look away from, making it the perfect weekend binge.

Available on: Prime (via Sundance)