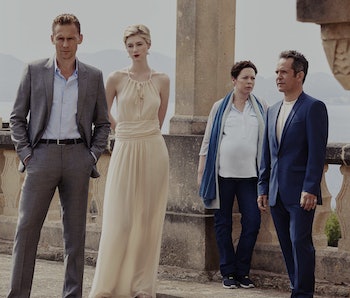 At long last, the BBC’s celebrated spy drama, The Night Manager, has made its way to American shores. Tom Hiddleston and Hugh Laurie are set to match wits in a globe-trotting adventure. It’s time to bask in the cat-and-mouse glory that is John le Carré’s lauded espionage thriller.

If you’re unfamiliar with the mini-series that’s already been critically acclaimed in the United Kingdom, here’s a little info for you. Trust us, this is one you’re going to want to pay attention to.

There’s a lot going on in this taut spy series, so let’s dive into the stunning premiere.

The story kicks off at the height of Egypt’s 2011 revolution, in the months when longstanding “President” of Egypt Hosni Mubarak was counting down the days until the end of his regime. It’s in the midst of this unrest where we meet Jonathan Pine (Tom Hiddleston), as he takes a calm stroll through the tumult. People are firing AKs, explosions are going off, and yet Pine is unfazed as he enters the doors of the Nefertiti Hotel, where he works as the night manager.

While the combat rages on around the hotel, Pine engages in his normal duties: calling taxis, arranging room service, convincing the guests not to walk out into a war zone, that kind of thing. That evening, Pine is approached by Sophie Alekan, the mistress of a reputed arms dealer Freddie Hamid. Sophie asks Pine to copy some confidential documents which turn out to be itemized lists of her boyfriend’s ill dealings.

What’s more, the letterhead on the items sport a logo for Ironlast, a company owned by reputed humanitarian Richard Roper (Hugh Laurie). Once the copies are made, Sophie asks Pine to put them in his safe and take them to his buddy should anything happen to her. Of course, his curiosity gets the better of him and he submits the papers to his buddy, Simon Ogilvey, because Pine believes that Hamid, Roper, and their buddies are trying to help squash the revolution.

It takes no time for this development to reach Roper, who immediately begins tying up loose ends. First order of business is to sic Hamid on Sophie, who attacks her viciously. In order to protect her safety Pine moves her on the sly to a remote location in rural Egypt. Almost inevitably, they have sex, after which Sophie spins terrible tales of Roper, who she calls, “the worst man in the world.”

The next morning, Pine contacts Ogilvey, his old buddy and the face of the English government in Cairo. Ogilvey refuses to protect Sophie because the Hamid’s are too powerful. They’ve donated more than a billion dollars to London in the past five years.

When Pine breaks the news to Sophie, she reacts kind of childishly, leaving her hideout, heading back to the Nefertiti and taking up residence in her old room. Moments later, Pine receives a call from Angela Burr (Olivia Colman), a desk jockey who’s on the hunt for Roper. Burr tells Pine to get Sophie out of her room immediately. Pine, sadly, is too late; when he gets to the room, Sophie is already dead.

In his sorrow, Pine has relocated to a desolate, but posh Swiss hotel where hes taken up another position as a night manager. One evening, Roper shows up with his entourage in tow. Though he’s immediately suspicious of Pine, having never seen him at the hotel before, he maintains a playful attitude and effects a kind of haughty friendliness. Roper gives off an immediate vibe of shrewd cunning.

In tow with Roper is his mistress Jed (Elizabeth Debicki), with whom Pine identifies immediately, since — like Sophie — he views Jed as a woman living at the mercies of an asshole. It’s this spark alongside his guilt over Sophie’s death that Pine contacts Burr.

Burr shows up in Switzerland to meet with Pine, where he confides “I saw things in Iraq that didn’t line up with my idea of what it means to be a soldier.” It’s an indication that Pines sense of justice his still quite strong. Combine that with his festering guilt and Burr seems to realize she’s got the perfect man to be her boots on the ground.

If the reviews are any indication, in the coming weeks, you can expect no dip in the quality of this immediately engrossing story. While the plot itself will contain plenty of twists and turns, the first episode definitely hinted at some of the mini-series’ over-arching themes.

First off, you can expect Jed and Pine to spend some time together. Pine sees her as an ersatz Sophie, so it’s only natural that he’ll project his longing on to her. There’s no promises that Jed is as pure as Sophie, though, since she seems to relish the luxury that Roper heaps on her. You can likely expect Pine to get pretty confused about this burgeoning femme fatale’s role in his life.

On the government end of things, theres definitely a leak inside MI6. Burr is portrayed as one of the few straight agents, a role that’s seen her essentially shunted to the side. (When we meet her she’s working out of an office that doesn’t even have heat.) You can expect her to try and ferret out the bad guy, a task that won’t be easy considering her superiors seem to believe that Roper is actually doing something akin to a public service by arming the people who are friendly with the British government.