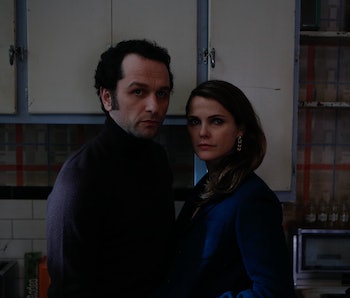 Beyond a shadow of a doubt, The Americans’s fourth season has shed its pensive, unclear atmosphere, and become the most uncompromising and action-packed season. Though it seems as if recently the Jennings have gotten more ruthless — and they are certainly feeling the guilt more — Philip and Elizabeth have a long history of making tough decisions and carrying out spur-of-the-moment atrocities.

We’ll try to avoid the salvo of horrifying moments that have been piling up in Season 4: the Don framing, the killing of her former informant Lisa (Karen Pittman), and Philip’s back-of-the-bus security guard takedown to “Tainted Love,” particularly, and revisit the most cold-hearted Jennings moments which led us to this point.

There has truly been nothing worse on The Americans — or more powerful — than the scenes between Elizabeth and Betty (Lois Smith), the book-keeper/secretary at the machine-repair place the Jennings invaded to bug the FBI’s mail robot. The price for this surveillance: Betty’s life.

The fact that Betty is done for becomes painfully, gradually clear as Elizabeth shares the intimate, normally classified details of her life with Betty, and Betty tells the story of hers. The elderly Betty goes poignantly willingly, but not without reproaching Elizabeth. Betty: “You think doing this to me will make the world a better place?” Elizabeth: “I’m sorry, but it will,” Betty’s last words, while overdosing from her heart medication: “That’s what evil people tell themselves, when they do evil things.” It’s cruel, heart-wrenching stuff.

This one heavily influences Philip’s guilt and doubt in Season 4; a couple episodes ago, we saw him, disguised, at the FBI IT man’s grave with flowers. In order to save Martha and protect the Center, he staged a false suicide — a hanging, at that — to make it seem like Craft was a spy who couldn’t handle the pressure. Philip goes through the motions, mechanically; he wrestles the life out of Craft, then types a fake suicide note on his computer screen. It’s the most professionally locked-in we’ve ever seen Philip/Mischa, and yet, he’s falling apart inside, more and more.

Chris Amador (Maximiliano Hernández), you may remember, was a jovial, sympathetic character — a perfectly bro-with-a-heart-of-gold buddy for Stan. He was also good at his job. When he tracks Philip and Martha down, it’s a cathartic, viscerally exciting moment — the first moment in the series where it seems like the Jennings’ jig could be up. Perhaps the worst deaths in The Americans are the gradual ones; like Betty with Elizabeth, we have to watch them interact. In this case, though, neither or Philip or Elizabeth deal the mortal blow. Amador’s life just flows out of him in the safe house. It’s maybe more traumatic than if Philip had stuck a knife in him. Of course, the impact is made worse by Stan’s retaliation: shooting the completely innocent Vlad (Vitaly Benko) in the back of the head in his apartment.

Andrew Larrick is one of the most dislikable characters ever featured on The Americans, a former KGB informant gone rogue, played with threatening precision by Lee Tergesen. Idealistic spy and former Sandinista Lucia (Aimee Carrero) comes to Larrick’s house with a tranquilizer gun to give him over the KGB, but he overcomes her in a struggle. Larrick gives Elizabeth a choice between Lucia’s life and his continued services to the cause. Elizabeth chooses him, and watches Larrick choke Lucia’s to death. And so another sympathetic character becomes a side casualty on The Americans.

Remember this? Let’s recall all the sordid shit that Philip and Elizabeth did. In order to obtain the bugged clock in the house of the United States Secretary of Defense, they poison the son of the Secretary’s maid, Viola (Tonye Pantano), and tell her they will not administer the anecdote unless she agrees to deliver the clock. After Viola and her brother attempt to thwart them again, Philip puts a pillow to her son’s face and begins to suffocate him, before Viola relents. Brutal stuff, for a seemingly small payout. But at the beginning of the series, especially, it was anything for the cause with the Jennings.