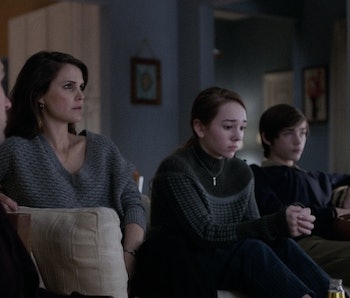 The ninth episode of The Americans’ tense, winding fourth season may, at first, seem like a retraction from last week’s high drama. After all, it begins with a cold open as Philip (Matthew Rhys) gives Paige (Holly Taylor) a driving lesson. But instead, Joe Weisberg and the team take The Americans’ dangling plotlines into darker, unprecedented realms.

First of all, Elizabeth’s (Keri Russell) “mission” with Young-Hee (Ruthie Ann Miles) becomes clear, finally; as biological weapons become Russia’s most pressing priority, Elizabeth has to take drastic, life-ruining measures to access “Level 4”-secured lab materials through her friend’s husband, Don (Rob Yang). While searching his house, and then rufieing him and planting evidence of a one-night stand that never happened, we can sense Elizabeth’s ever-steely resolve weakening. We don’t know what the game plan is here — how this will help the Center obtain the ominous “codes” — which makes her behavior even more shocking, blow after blow.

At the episode’s center is the premiere of the notorious World War III-event TV movie The Day After, which premiered on ABC in November of 1983. All of our major players, no matter their allegiances, gather around their fuzzy sets to watch the film, from the Jennings, to Arkady (Lev Gorn), to Oleg (Costa Ronin) and still-shadowy agent Tatiana (Vera Cherny) — who we learn are sleeping together, for whatever reason — to William (Dylan Baker).

The film is campy alarmism, ending in a cartoonish apocalypse; Weisberg shows us some of the more ridiculous moments. Yet it clearly strikes fear into the hearts of those on both sides of the conflict. We might expect anger from Elizabeth and Philip over the fear-mongering, capitalistic dreck, but instead, the propaganda touches on their apprehensions.

After all, they are in the process of debating whether to proceed with giving a sample of the deadly Lassa virus (which, as William puts it, causes your “organs to come through your skin”) over to the Center. William tells Philip, in a major turn for his character, that he “wouldn’t trust us with it,” referring to the KGB. Everyone, from Stan (Noah Emmerich) to Oleg to William — who is on the inside — seem concerned about what fresh levels of hell the arms race will descend to next.

What is the best way to stop disaster? the episode asks, digging into the moral ambiguity of both sides with more elan, which simultaneously making the fearful motivations behind their sordid activities more understandable — from the Jenning’s respective operations to Oleg and Tatiana’s apprehensive pillow talk. Though we watch Elizabeth perform one of the most heinous operations we’ve ever seen her carry out on the show (and there’s plenty of competition there), Weisberg still shows us, as sympathetically as possible, the reasons she believes she is doing the right thing. Matthew and Elizabeth’s justifications of their activities to Paige begin to seem more and more authentic.

If Paige seems a bit more on her parents’ side these days (it’s unclear, scene to scene) we’re still left with an apprehensive feeling about the future of the Pastor Tim (Kelly AuCoin) saga. After his mission trip to Ethiopia, Tim specifies that he wants to sit and talk with Paige, himself and Elizabeth about “where they’re at,” seeming concerned that Paige is in trouble.

One wonders: Who is making Paige doubt her faith more, her parents or simply adolescence in general? Where will her allegiances fall? With Elizabeth beginning to crack under the strain of the Young-hee/Don operation, it’s a toss-up if the Jennings will be able to continue to hide how dirty their dealings can be from their daughter and son anymore, and if that will be their downfall.