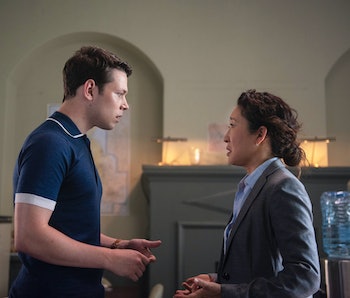 Killing Eve picks up six months after the Season 2 cliffhanger left Eve bleeding out in Rome and Villanelle walking away with a smoking gun. Season 3 doesn't let up on the traumatic twists, kicking off its latest run of episodes with a devastating death. One of the show's cast members recently weighed in on the events leading up to the stunning turn, suggesting there may be far more to the story than we initially realized.

With the unpredictable assassin Villanelle believing Eve to be dead, the pair were leading separate lives and staying off of MI6’s radar. There was just one unresolved problem: The Twelve, the secret criminal organization with ties to Villanelle, Carolyn, and everyone in between was still at large. Now, it seems Kenny may have gotten a bit too close.

Kenny — who was presumably investigating a top secret case at his new job — was all set to go out for drinks with Eve when he heard a weird thud coming from the roof of the building. In a twisted turn of events, Eve shows up at Kenny’s office just in time to see his body falling from the roof, hitting the pavement below. It was gruesome and disturbing, but the real kicker is that we never actually see Kenny’s confrontation with whoever is on the roof, leaving the events leading up to his death a total mystery.

One fan theory suggests that Kenny’s co-worker, who kept stealing odd glances at him and eavesdropping on his conversations, is the murderer. Of course, anyone could be a suspect at this point and the theory is plausible. However, that assumes someone pushed Kenny in the first place.

In an interview with Metro, actor Sean Delaney hinted that nothing is as it seems and teases other circumstances surrounding his character's fall.

“The whole thing happens within the world that has already been set up, I’ll say that much. However, there’s another option which is the idea that nobody pushed him off. That question becomes raised in later episodes.”

There’s a lot to unpack here. The obvious assumption is that Kenny was killed, but it’s also possible he died by suicide. Perhaps someone blackmailed him and then coerced him into jumping off the roof. We know Eve will team up with Kenny’s co-workers at the Bitter Pill to investigate The Twelve, so it’s possible they are behind his death.

But why kill sweet Kenny? It’s possible he was onto something huge and they didn’t want him taking that information to Eve. Whatever the case may be, it seems there’s a distinct reason for why the moments prior to Kenny’s fall weren't shown and it’s only a matter of time before the truth is finally revealed.