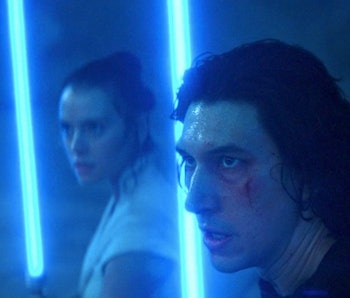 Balancing the Force was never a one-Jedi job. And, if you imagine a slightly more coherent, less-rushed version of The Rise of Skywalker, the idea that Rey and Ben’s bond was the essential thing to even out the Force scales, then suddenly, the silliest thing about Episode IX, becomes the best thing.

Let’s talk about the Force Dyad, and why, on paper, it’s actually the best thing about The Rise of Skywalker, even though it seems like the worst.

We Need to Talk About the Force Dyad

A new book called Skywalker—A Family at War, written by Kristin Baver, is a fictional history book focusing on one aspect of Stars Wars, from an in-universe perspective. It seems like the first non-fiction Star Wars book that is canon, but also, a book of prose, as opposed to say, a coffee table book like the Star Wars: The Rise of Skywalker: The Visual Dictionary. A few excerpts from the book have been published recently, including one focusing on Ben Solo and Rey’s respective histories.

There are all sorts of interesting details here about how Han Solo became the worst dad ever, but, relative to Rey and Ben, the details glossed over the quickest are, arguably, the things that make Ben and Rey’s relationship so interesting. Here’s what is said about their Force Dyad in the book, according to io9:

“The two were indelibly linked by the Force in the form of a dyad. The precise cause and nature of such a thing is shrouded in mystery. Both halves of the Force-centered bond had prodigious strength in the Force, dynastic family lineage, and together, a raw power unseen for generations that had the ability to bring forth life itself.”

The “unseen for generations” line is straight from Grandpa Palps’ rant in The Rise of Skywalker, when he both introduces the concept of “a dyad in the Force,” and then decides to use it for his own purposes less than 15 seconds after we’d even been allowed to think about what it might mean. It’s a shame there’s not more about it in this excerpt, which is hardly the fault of the author. Clearly, Lucasfilm doesn’t want to get too deep into the dyad stuff; either because they kind of want everyone to forget about it, or because they’ve got plans for it.

Either way, as A Family at War makes pretty clear, even briefly, the dyad is 100 percent the most interesting thing about Rey and Ben’s whole deal, specifically because it’s basically the low-key reason why the Force was balanced.

Let’s not get it twisted, at the end of The Rise of Skywalker, the Force was rebalanced, and we know that because Anakin said to Rey, “Bring back the balance Rey, as I did.” If we take this literally, this means Anakin’s ghost believes he succeeded at balancing the Force by killing Palpatine the first time. If we accept that Anakin balanced the Force, what unbalanced it?

Here’s a theory it feels like might line up with the Freddie Prinze Jr. side-of-the-Force. Back in October 2019, Prinze Jr. — the voice of Kanan Jarrus on Rebels — laid out a fairly convincing way to think about the Force dealing with its own ebbs and flows. Here’s the relevant bit:

“The Force dictates who wins and loses based on balance... So the Emperor knows that. Instead of killing Anakin, what does he do? He seduces Anakin. To double the strength of the Dark Side. So what does the force do? It balances us. How? It gives us twins. Luke and Leia. Two and fucking two. Balance.”

Notably, the Freddie Prinze Jr. Force-rant happened before The Rise of Skywalker came out and before we knew (for sure) that a Force dyad was part of the plot. But, he did qualify it by saying he knows all about the Force “because Dave Filoni taught me and George Lucas taught him.”

So, if we revisit the Prinze Jr. equation, then after Palpatine and Vader both die, the Force is balanced because Luke and Leia have just enough darkness and light within them to keep everything fairly stable. But then, Leia and Han decide to have a baby — Ben Solo — arguably once again unbalancing the Force.

And so, in order to rebalance the Force, Rey is born. This means the dyad between Rey and Ben is essential to balancing the Force in general and seems to indicate that the will of the Force created the hot and sweaty bond between Rey and Ben because, basically, it just had to. (That’s right, “Reylos,” it was destiny!)

This idea lines up with George Lucas' canon because in The Clone Wars Mortis episodes, we’re basically told outright that Anakin’s refusal to stay on Mortis is what causes the first big unbalancing of the Force to happen. The takeaway there? Very powerful people could unbalance the Force by being selfish, but it could get rebalanced by sacrifice.

Why the Force Dyad is bad news for Baby Yoda

This may not be something anyone wants to hear, but Grogu could totally meet Ben Solo in The Mandalorian Season 3. Ben was born in 5 ABY, not long after the Battle of Endor. The Mandalorian happens in 9 ABY, meaning Ben Solo is roughly 4-years-old at the exact time Luke Skywalker snags Grogu from Mando.

Assuming Ahsoka and Grogu are powerful enough to change the balance of the Force (big assumption!) the fact that Grogu could possibly meet pre-schooler Ben Solo in Mando season 3 is somewhat terrifying. Family at War tells us that even as a toddler, Ben still had “late-night temper tantrums.” In fairness, this is not a sign your child is going to turn to the Dark Side, but it could indicate that little-kid Ben is not yet being trained by Luke as a Jedi.

The larger point is this: If the dyad was the thing that helped bring the balance back after the birth of Ben Solo, then in Baby Yoda’s time, it doesn’t exist yet. Rey won’t be born until 15 ABY, six years in the future for The Mandalorian timeframe. So, if Grogu has any impact on balancing the Force, that won’t be the case by the time Rey shows up. Then again, who knows when the Force decided to make a dyad between Rey and Ben at all? Snoke claimed he linked the minds of these two back in The Last Jedi. But, from what we saw in The Rise of Skywalker, the Force clearly had other plans.

If Star Wars canon does decide to revisit the concept of the dyad, it should happen with pride and confidence. The problem everyone had with the dyad in Rise of Skywalker is it was hastily explained and barely seemed to matter. But, based on what we know about the Force’s obsession with balancing itself, the basic concept makes a lot of sense. Let’s just hope Baby Yoda decides to quit the Jedi Order before things get too rowdy with Ren.

Skywalker — Family at War is out now.