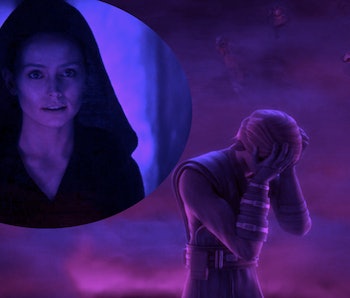 Who balanced the Force? Anakin? Luke? Rey? If you selected any of those three names and then added, "from a certain point of view," in your best Alec Guinness voice, nice work. But let's get serious. It's been over four months since Star Wars: The Rise of Skywalker came out, and we're still trying to figure out how Rey taking on all of the Sith in Episode IX jibes with Anakin Skywalker "bringing balance to the Force," in Episode VI.

One new fan theory suggests we can trace the need for Rey to save everyone back to the most absurd Clone Wars story-arc of them all. That's right. Let's head back to Mortis and see if we can't make some sense of the scales of the Force.

Over on Reddit, a user named Ya-Boi-Sheev (greatest Reddit handle ever?) pointed out that when rewatching the Mortis arc in The Clone Wars Season 3 (that's episodes 15, 16 and 17 in that season) you could come away with the following interpretation: "...Maybe Anakin didn’t fulfill the prophecy, as he didn’t really bring about balance by taking the place of the Father, and gaining his power and position."

Anakin had one job — In this three-part-episode, Obi-Wan, Ahsoka, and Anakin find themselves on the "planet" Mortis, where metaphysical manifestations of the Light Side ("Daughter"), the Dark Side ("Son"), and a being who keeps them in check ("Father") seem to all exist and directly impact what happens in the Force based on their actions. So when the Father asks Anakin to stay and keep the dark and the light in balance, you're meant to think this is the moment where he can fulfill the prophecy.

In fact, the oddest thing about the Mortis arc is that if you'd never seen the original trilogy, and you were watching all of Star Wars canon chronological in order, you'd bee legit confused as to why Anakin didn't take the place of the Father. Everything in the Mortis episodes really seems to be the exact opportunity for Anakin to step-up and become the Chosen One. Here's a guy who's literally in charge of the Force telling Anakin that he should stay on Mortis and balance it. At one point, Anakin even holds up the Daugther and the Son (both in like Force beast-mode) and literally keeps them in check at the same time.

But, this doesn't last. Anakin doesn't stay on Mortis, the Son and the Daughter both "die" and the universe is screwed.

I'll finish what my grandfather's drinking buddy started — If we accept this Reddit theory then it allows us to figure out a way to reconcile George Lucas' "Chosen One" canon with what happens at the end of The Rise of Skywalker. According to Lucas, Anakin fulfilled the prophecy as Darth Vader in Return of the Jedi; by destroying the Sith — himself and the Emperor — he brings balance to the Force. But as Episode IX seems to establish, that was a short term gain.

It's unclear when Palpatine was reborn in between Return of the Jedi and The Force Awakens, but it's a safe bet it was pretty quick. Nonetheless, from a purely semantic point of view, Anakin did destroy the contemporary Sith and brought balance, at least for a little while. Luke Skywalker even tells Rey in The Last Jedi that there was balance in the Force for a hot second, but then it got messed up.

In The Last Jedi, it's heavily implied that Ben Solo is the person who made the Force get unbalanced, but if Anakin didn't permanently balance it in the first place, then the whole concept of Mortis becomes a wash, and everybody else post-Anakin is tasked with rebalancing the Force, rather than balancing it permanently. Thinking about that, Anakin's line to Rey in The Rise of Skywalker makes perfect sense: "Bring back the balance Rey, as I did."

Notice the way this line is spoken: Anakin is saying he brought back the balance. And the reason he brought it back is that it actually existed during his lifetime, arguably, on Mortis. So, because Anakin messed-up the natural Force-balancing system on Mortis, he had to bring the balance back by killing himself and the Emperor. But because the Emperor continued to live after Episode VI, Rey had to do it again.

The Dyad Became the New Mortis — Things get a little trickier when you start to think too hard about Ben Solo's role in all of this, but if we consider his alliance (dyad) with Rey to be part of how she restores balance, then it's not that tricky at all.

Instead of Mortis (a lost cause, screwed up by Anakin), the Force created a dyad to replace it. Rey and Ben "balance" the light and the dark sort of naturally between their connection and because of their respective lineages have a good mix of light and dark within them. Arguably, Ben Solo and Rey are more well-rounded than Luke or Anakin ever were in terms of their experiences with the Light and Dark sides of the Force.

So if the dyad replaces the metaphysical function of Mortis, then it makes perfect sense that Rey does re-balance the Force. And as she's doing it, Anakin's ghost subtly cops to the fact that he didn't get it right the first time.

This may not be the tidiest way of reconciling multiple "Chosen Ones" within the Star Wars canon, but if we focus just on what people said and did, the George Lucas notions of Anakin's destiny and the sequel trilogy's wrinkle on all of that might, for the first time, be existing in a fragile but reasonable balance.

The Rise of Skywalker is out now for digital download and on Blu-ray. The Clone Wars is streaming on Disney+.