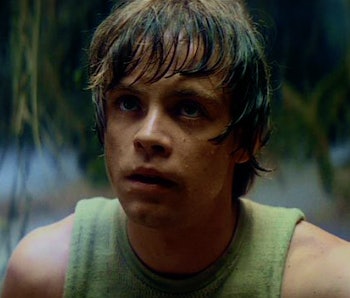 Other than the death of a major character, the newest episode of Star Wars Rebels also changed a huge part of the ongoing mythos of the entire saga: the identity of the “Chosen One.” According to Obi-Wan Kenobi in “Twin Suns,” the Chosen One — a foretold person who will bring balance to the Force — isn’t Anakin Skywalker anymore; it’s his son Luke. If we’re meant to trust Obi-Wan on this point, then this is a big pivot in Star Wars canon, one that could put some huge responsibilities on Luke’s shoulders in the upcoming film, The Last Jedi.

The idea of the Chosen One was first introduced in Star Wars: Episode I — The Phantom Menace. When Qui-Gon Jinn brought the young Anakin Skywalker to the Jedi Council, he trotted out a dusty old prophecy that claimed one person, and one person only, would bring balance to the Force. He says that person is Anakin Skywalker, who is a “vergence” in the Force who wasn’t conceived biologically, but instead born out of the midi-chlorians. Subsequently, this confusing prophecy got even more confusing. In the next movie, Attack of the Clones, Obi-Wan defends Anakin’s status as the Chosen One, saying “is he not to destroy the Sith and bring balance to the Force?” Notice, the “destroying the Sith” part was new to the audience since it wasn’t in Qui-gon’s initial spiel. Was it also part of the old prophecy, or did Obi-Wan just want to talk some Sith destroying to hype up Anakin?

Obviously, by the end of Revenge of the Sith, Obi-Wan’s faith in Anakin being the Chosen One is, uh, fucking gone, since Anakin’s murder spree disqualifies him from being anyone who brings any kind of balance to anything.

But … George Lucas, the creator of literally all of this stuff, said pretty clearly that he felt Anakin was still the Chosen One. Despite Anakin turning to the Dark side of the Force, killing children, and sporting a mullet, Lucas feels that, eventually, he came through in the end.

“Even when Anakin turns into Darth Vader, he is still the Chosen One,” Lucas said in 2005, “Darth Vader does become the hero. Darth Vader does destroy the Sith, meaning himself and the Emperor. He does it, because he is redeemed by his son.”

Semantically speaking, this is a little wonky. With Lucas’s explanation, Luke sounds sort of like a co-Chosen One, or like a Chosen One Life Coach. Without Luke, Anakin wouldn’t have become the Chosen One, so wasn’t Luke kind of the Chosen One already?

In “Twin Suns,” Obi-Wan straight up tells the dying Darth Maul that Luke is the Chosen One and Maul is jazzed. “He will avenge us both,” Maul groans before dying, implying he thinks that the Emperor screwed both Obi-Wan and himself equally. The episode ends with Obi-Wan watching over Luke in the distance. Rebels producer Dave Filoni told io9 that the inclusion of Luke in this episode was to help a casual viewer understand what was going on. “It’s designed to give you that specific bit of information that you need in the story,” he said. But what if it’s also designed to give specific information about the future of the overall story of Star Wars?

People talking about bringing balance to the Force was notoriously absent from the classic Star Wars trilogy, since the concept wasn’t introduced until the prequels decades later. So, there isn’t any evidence in Episodes IV-VI for us to go on. However, the new movies are adding additional wrinkles to the confounding Chosen One puzzle. In The Force Awakens, true-believer Lars San Tekka tells Poe Dameron that “without the Jedi, there can be no balance to the Force.” It’s the first scene of the entire movie.

At this point, George Lucas’s idea that Anakin brought balance to the Force is seemingly out the window because Anakin is dead with no indication that he’ll return as a ghost, and the Force is still seriously unbalanced. Everything we see in the rest of The Force Awakens supports this idea. Darth Vader’s grandson is running around having lightsaber temper tantrums, while Rey uses Jedi mind tricks on dumb stormtroopers. Clearly, the Force isn’t balanced and doing whatever it wants, including, apparently, awakening from a long nap.

Obi-Wan has been wrong about a lot of things, meaning he could be wrong about Luke being the Chosen One. But, it’s a pointed moment for the Star Wars canon to be even talking about this kind of thing. We’re only nine months out from The Last Jedi hitting theaters, which has a title that seems to imply questions about the nature of the Force and its future will be addressed. Many fans are speculating that Rey won’t become a Jedi in this movie, but instead, a new kind of Force warrior. Because if Luke Skywalker is the real Chosen One, maybe bringing balance to the Force means getting rid of the dogmatic Jedi Order. Which of course, would definitely make him the last of his kind.