"Your journey nears its end." 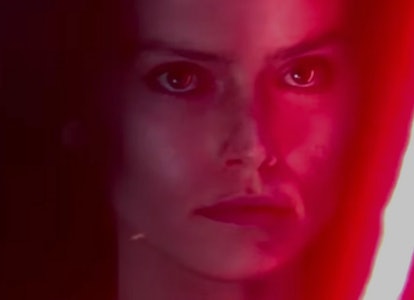 With the early release of Star Wars: The Rise of Skywalker on digital and Blu-ray, new details about the four-month-old movie are trickling out at a steady pace. We may not be getting any deleted scenes, but some behind-the-scenes photos could reveal a shocking Empress Rey moment that almost made it into The Rise of Skywalker.

The image, which has been making the rounds on social media for at least a few days, shows Rey in a dark robe sitting atop Sheev Palpatine's stony throne on Exegol. J.J. Abrams can also be seen directing the scene, along with a hovering camera suggesting a long panning shot.

This isn't the only scene from The Rise of Skywalker that didn't make it into the movie. Despite the lack of deleted scenes in the official release, Inverse spoke to a source who indicated that Adam Driver also filmed a scene where Kylo Ren tortured Chewbacca onboard his ship. A similar scene was teased in the leaked concept art for Colin Trevorrow's scrapped Star Wars script, but it turns out J.J. Abrams may have filmed (or at least considered filming) this scene before ultimately scrapping it as well. Apparently, Driver wasn't very happy about it either.

Anyway, back to Empress Rey...

While it's tempting to speculate that this image reveals an alternate ending to Rise of Skywalker where Rey gives in to the Dark side and claims her birthright as a Sith Lord, that's almost certainly not the case. The latest Star Wars movie made it clear that Rey was having visions of herself on the Sith throne, and now we know that Abrams actually filmed those scenes.

Here's that moment in the movie, which is delivered as dialogue between Rey and Finn moments after Rey seemingly kills Chewie by blowing up a ship he's on using Force lightning:

Finn: It wasn’t your fault.

Rey: Chewie’s gone. That power came from me. Finn, there are things you don’t know.

Finn: Then tell me.

Rey: I had a vision of the throne of the Sith, and who was on it.

That sounds a lot like the image above, except Kylo Ren is missing. So why wasn't Rey's actual vision in the movie? We may never know. Maybe it just didn't work with the story. Maybe it wasn't necessary. Or maybe Rey's vision got cut to make room for more Wayfinder shenanigans. All this image confirms is that Rise of Skywalker deleted scenes exist, though we may never actually get to see them.

Star Wars: The Rise of Skywalker is available now on digital.