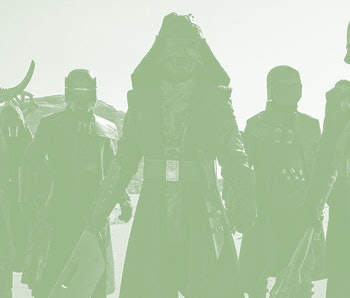 Were you thirsting for more of the Knights of Ren in the Star Wars sequel trilogy? Well, you almost got your wish. Apparently, when Colin Trevorrow and Derek Connolly wrote their version of Star Wars: Episode IX — Duel of the Fates — the one thing they wanted was more Knights of Ren. These enigmatic badasses show up a lot more in this version of the story and actually play a major role in the plot and manage to fix a pretty glaring Force Awakens plot hole.

After various summaries of Duel of the Fates leaked online, an apparently legitimate entire version of the script hit Reddit and Twitter last weekend. If you've been following the saga of the un-filmed Trevorrow version of Star Wars: Episode IX, reading the script will — for the most part — confirm what fans have been worried about: It seems like this script was a lot better than what we got. Would everyone have gone along with shipping a Rey/Poe romance? Is Kylo's redemption a little too little and too late in this version? Sure, there are some problems, but for the most part, it seems like Duel of the Fates could have been a crowd-pleaser that didn't overly rely on nostalgia or retcon. And, most of all, it actually fixed something J.J. Abrams introduced in The Force Awakens.

For nearly four years, fans debated about the meaning of Rey's vision in The Force Awakens. In it, the Knights of Ren stand ominously in the rain. In the Duel of the Fates script, we learn Kylo Ren killed Rey's parents, and that vision of the Knights came from that exact moment.

On page 69 of the script, we get an early hint as to the meaning of that scene. Rey is fighting Hattaksa Ren, and when she looks at this Knight of Ren's mask, she has the Force Awakens flashback again and responds in anger. Then this happens:

This vision stirs a deep, vengeful ANGER in Rey. One she can’t yet explain but knows to be true.

Hattaska Ren’s skull flashes within his helmet as the electricity destroys him.

Rey rises. Poe and Chewbacca are watching her, disturbed.

It’s okay. Jedi do that. Right?

I’ve seen that mask before. All of them.

So in Duel of the Fates, Rey does shoot lightning, but not because she inherited it from grandpappy Palps. Instead, she uses this ability after recognizing the Knights of Ren masks from her memory. During the epic lightsaber fight between Rey and Kylo at the end of the movie, Kylo admits it outright:

My parents didn’t sell me for drinking money. They were hiding me from you.

FLASH TO The Knights of Ren in the rain--the image from Rey’s Force vision when she first touched the lightsaber.

Snoke made his orders clear. Find anyone who could destroy him. It didn’t take us long to find you.

You killed my parents.

You blame me for your life on Jakku. You should thank me for it. You were safe.

Say it! Did you kill them?

Turns out, Ben Solo was not a good boy in the original Episode IX script and the reason why Rey had such a profound vision of the Knights of Ren is that they were all present at the murder of her parents. Which, in this version, she apparently aware of through the Force, and remotely "saw" their murder from Jakku, as a child. Heavy.

These scenes may not make us like Kylo Ren, and feel darker than the Episode IX that we got. Still, this script makes sense relative to Force Awakens. In Duel of the Fates; Rey understands why she had the vision of the Knights of Ren. In The Rise of Skywalker, we never really get that clarity. Sure, the Knights of Ren are in the actual movie more, bu we're never really sure why she saw them in that damp dream sequence.

Instead, Abrams created a proxy for this plot point with the Sith agent Ochi, the true killer of Rey's parents. Clearly, Abrams was intent on turning Kylo Ren back to Ben Solo and giving him a heroic end, so the idea that Kylo murdered Rey's parents wouldn't have worked. But what about the other Knights of Ren? Was there no way to incorporate them into that backstory?

As it stands, The Force Awakens and The Rise of Skywalker have several dangling, unresolved threads between them. But, the one that stands out the most is easily Rey's connection to the Skywalker lightsaber and her ominous vision in The Force Awakens. For better or for worse, Duel of the Fates would have made this connection clearer. And just like Rey building a double-bladed blue lightsaber, cobbled from Anakin's old saber and her staff, it sounds like it would have been amazing. Grittier and dirtier than The Rise of Skywalker, but certainly something everyone could have accepted. Maybe.