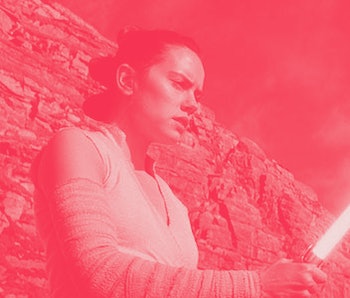 Now that the book has closed on the Star Wars’ sequel trilogy, one of the biggest mysteries remaining is how Maz Kanata got hold of Luke Skywalker’s blue lightsaber. While Rey took the blade to be buried on Tatooine at the end of Star Wars: The Rise of Skywalker, the weapon’s journey before The Force Awakens is a big question mark. However, a new Star Wars comic may hold the key to solving the mystery of Luke’s lightsaber in a way that Rise of Skywalker never did.

It’s not an exaggeration to say that Luke’s blue lightsaber has had a long and arduous journey. Gifted to him by Obi-Wan Kenobi, the famous weapon once belonged to Anakin. Luke trains and fights with the weapon throughout the original trilogy.

However, when Luke fights Darth Vader in Cloud City on Bespin in Empire Strikes Back, he loses the lightsaber along with his right hand, sliced clean off by his father. The lightsaber falls down a shaft, never to be seen again… for a while, anyway. Luke’s blue lightsaber doesn’t reemerge until Maz Kanata gifts it to Rey in The Force Awakens. But, how did it get there? Neither The Last Jedi or Episode IX offer an explanation for how Maz got a hold of it, but Marvel’s Star Wars #2 comic book might hint at the answer.

Star Wars #2 takes place shortly after Luke’s lightsaber goes missing. Wanting to get back to Cloud City but knowing the Rebels won’t let him, Lando Calrissian appeals to the Jedi, who’s lost some of his connection to the Force. However, Luke is unwilling to return to Cloud City after dueling Darth Vader, but Lando argues that he will help Luke find his lost lightsaber. In fact, if he assists him in getting to Cloud City, Lando will reveal where Luke’s saber “ended up when it fell.”

As soon as Lando makes the offer, though, Luke senses something and the comic panel reveals that Luke’s blue lightsaber didn’t just keep falling, but was caught by an unknown figure who calls out to Luke through the Force with a message to “follow your destiny.” Check out some of the panels from Star Wars #2 below!

The comic panel made its way to Reddit, where it attracted lots of attention. After all, the whereabouts of Luke's lightsaber were believed to remain unknown. With the person’s face hidden in shadow, it’s hard to tell who it could be or even if it’s a man or a woman. Could it be the Force ghost of Qui-Gon Jinn who’s caught the lightsaber? The Jedi was very into destiny, after all. Or is it the Force ghost of Obi-Wan Kenobi?

Perhaps it’s not a Force ghost at all, but someone Luke doesn’t already know. Whoever it is, it’s definitely not Maz Kanata though. With Lando and Luke possibly headed back to Cloud City, it seems Star Wars #3 will offer some more insight into who is in possession of the lightsaber and whether he ever gets it back. Whatever the case, the comic finally offers fans some answers.

Star Wars #2 is written by Charles Soule, with art by Jesús Saiz and is available now.