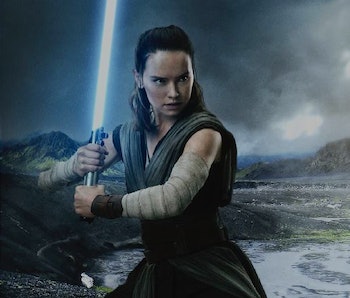 After breaking in half at the end of Star Wars: The Last Jedi, Luke’s lightsaber will return in The Rise of Skywalker, where it’s rumored to play a key role in defeating Emperor Palpatine. But we still don’t know the answer to one agonizing question: What happened to that lightsaber in between the events of Empire Strikes Back (when Luke dropped it as his hand was sliced off) and The Force Awakens (when Rey found it in Maz Kanata’s castle)? Now, it looks like the mystery of Luke’s saber may finally be answered in an upcoming Star Wars comic book revealed by Lucasfilm at New York Comic Con.

At a Lucasfilm Publishing panel attended by Inverse, Director of Creative Franchise Michael Siglain and writer Charles Soule revealed plans to reboot the current Star Wars comic book series this January with Star Wars #1, which picks up immediately after Empire Strikes Back. (The previous Star Wars comic run filled in the blanks between A New Hope and Empire.)

“This book picks up immediately after Empire Strikes Back,” Soule said. “It starts to dig into unanswered questions.”

Unanswered question? Like the mystery of Luke’s lightsaber? Based on one Star Wars #1 panel revealed at NYCC, it seems very possible the answer could be yes.

In the image above, which shows one of the first panels in Star Wars #1, you can clearly see the moment that Vader chops of Luke’s hand in Empire Strikes Back. What happens to the lightsaber (and the hand) next? We have no idea, but this comic book may finally reveal the answer — assuming Star Wars: The Rise of Skywalker doesn’t do it first.

And it’s definitely possible that the ninth Star Wars movie will do just that. We know that J.J. Abrams considered starting The Force Awakens with a montage showing how Luke’s lightsaber traveled from Bespin to Maz Kanata’s basement. Now that Abrams is back for The Rise of Skywalker we could finally see that happen on the big screen. And if not, at least we know there’s a decent chance that Star Wars #1 will fill in the blanks come January.

Oh, and Lucasfilm also announced a similar reboot for its Darth Vader comic book, which will fill in the gaps between Empire and Return of the Jedi from Vader’s perspective.

“Vader is just as shook in that moment,” said writer Greg Pak. “Something’s going on with Vader, and we’re going to explore that in this series.”

Star Wars #1 arrives in January followed by Vader #1 in February. But before that The Rise of Skywalker hits theaters on December 20.