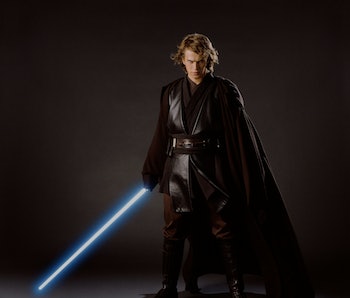 Before the new Star Wars trilogy even began with the release of The Force Awakens in 2015, we already knew a certain lightsaber was coming back. It might seem like a million years ago, but those early posters and trailers for The Force Awakens trolled everyone by showing Finn wielding the famous blue-bladed Skywalker weapon, implying that Finn was our new heir apparent to the ways of the Jedi. But when we saw The Force Awakens, the moment with the lightsaber flies into Rey’s hand became possibly the best twist in all of Star Wars.

And yet, four years later, we still have no idea how that lightsaber was rescued from the depths of Cloud City. When you think about it, of all the big questions we have about The Rise of Skywalker, the mystery of the return of Anakin’s lightsaber is easily the biggest. So here are three possible ways that The Rise of Skywalker could resolve this mystery without anyone totally freaking out.

3 Darth Vader Personally Had it Retrieved From Bespin

When Darth Vader cuts off Luke’s hand in The Empire Strikes Back, he is, of course, aware that the lightsaber that hand was clutching was one he built. Because Luke’s lightsaber in Empire is actually Anakin’s lightsaber, it seems likely Vader (who used to go by the name Anakin Skywalker) would want it back. If the Empire really did use up a bunch of kyber crystals in building the Death Star, it seems like Vader would know those crystals are scarce, and so, he might have flown down there himself and looked for it!

On the other hand (see what I did there?) Darth Vader was really busy right after his lightsaber duel with Luke in Empire, which makes it seem unlikely he’d have the time to search for his old lightsaber, even if it was attached to his son’s hand.

In that case, it’s possible a bunch of smugglers picked it up while scouring Bespin and Cloud City for all kinds of junk. Basically, junk traders like Rey (or her parents) could totally be the kind of people who picked up the saber and eventually sold it to the Smuggler Queen, Maz Kanata. (Where Maz got that sweet wooden box for the saber is likely never going to be answered.)

1 Kylo Ren’s People Tried to Get It … and Failed

One line from The Force Awakens might reveal a story behind the saber that’s already been ongoing. According to a ton of reports, J.J. Abrams actually considered opening The Force Awakens with Luke’s hand and lightsaber spinning through space. Also, aspects of Rey’s Force vision in The Force Awakens may or may not have shown the journey of the lightsaber specifically, which is why there’s a brief moment that Rey is standing in a Cloud City corridor.

For years, we’ve all wondered what Rey was witnessing when she saw the Knights of Ren in this vision, and it’s certainly possible they were trying to snag the lightsaber. And, even if the Force vision isn’t connected to the journey of the Skywalker lightsaber, there’s that line from Kylo Ren when he faces Finn in the forest on Starkiller Base:

“That lightsaber. It belongs to me.”

This implies Kylo Ren knows the lightsaber wasn’t just lost on Cloud City and has been actively looking for it. Which of course, implies that he totally failed in obtaining it somehow. (Also, Kylo owns Darth Vader’s melted helmet. Of course, he was trying to track down Anakin’s original saber!)

Could any of this stuff come back in The Rise of Skywalker. Well, here’s one reason to think that it all might. In the early trailers for The Force Awakens, a shot of Maz Kanata handing Leia the classic Skywalker lightsaber was very, very clear. But, this shot never appears in the movie. So, now that J.J. Abrams is using old footage of Carrie Fisher from The Force Awakens it feels very possible that this lightsaber shot could make a big comeback.