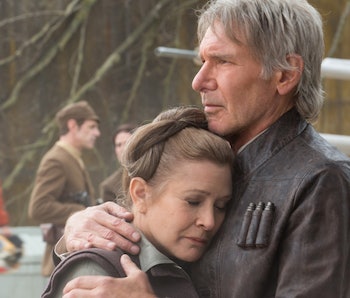 There are perks to starting from scratch. With a storytelling universe as big as Star Wars, the split between canon and “Legends” — previously known as the Extended Universe — allowed the Skywalker Saga to grow into the multi-generational trilogy of trilogies it is today, bolstered with a select few comics, novels, audio adventures, and TV series.

But with that divide between what’s considered “official” and what’s not, there are now so many stories from once upon a time that no longer “count,” at least canonically. The flipside there: it’s a chance to fill in the details all over again. What happened between the original trilogy and the sequel trilogy? A sneak peek at a new Star Wars book reveals some of these lost moments — and some of them change Star Wars forever.

Star Wars: Skywalkers — A Family at War attempts to tell the story of the Skywalker Saga, from Anakin to Rey (“Skywalker, Rey Skywalker”) in a single novel. This linear look allows a new perspective on a story very segmented into three distinct chapters.

An excerpt released to io9 reveals just how much of a glimpse we’re getting into these beloved characters’ lives. It explores the childhood of a young Ben Solo, and Han and Leia’s transition into parenthood. Given what becomes of Ben, it should come as no surprise that Han and Leia’s road was a rough one. Leia’s post-war life was always a point of personal frustration for her, in both canon and Legends — if you spend your formative years working to overthrow a fascist government, going back to a life of diplomacy and Senate hearings is quite the let-down, and motherhood isn’t much better.

Probably the most interesting part of the excerpt is the description of Han’s approach to fatherhood. Surprise, surprise: Han wasn’t exactly the most present parent. In the excerpt, he quips “I smuggle, not snuggle.” This distance wasn’t fueled by a lack of affection, however. It was merely fear.

“Han had never really envisioned himself as a parent or guardian. He had no role models to draw on; to him, beating a path through parenthood was like flying blindfolded through an asteroid field and perhaps even more deadly.”

Han was afraid of messing up, and his fears were actualized when Ben turned to the Dark Side. But even that wasn’t the first failure to Han. Han thought fatherhood meant he would pass the Falcon down to a new generation. According to the excerpt, Ben’s decision to enter Jedi training made Han jealous of Luke.

This realization, that Han had so many expectations — both of himself and his son — make the loss in The Force Awakens all the more heartbreaking, and finally explain what happened in all those years between the original and sequel trilogies. Yes, one-off adventures can be laid out in canon novels and comics, but the Ben Solo we see kill his father years later wasn’t most affected by the big adventures, but in the quiet moments we don’t get to see.

Making time for intimate character moments in a high-octane sci-fi franchise is a tall task, and while we may have lost a decade’s worth of backstory to Legends, books like this remind us that behind the vest and buns, Han and Leia were just two people trying their best to raise a child, even though they lost so much of who they call family.

Star Wars: Skywalkers — A Family at War is now available for purchase.