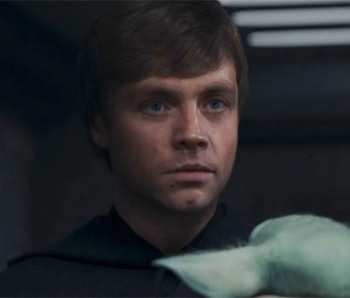 The biggest question for The Mandalorian Season 3 — outside of King Mando taking the throne of Mandalore — is how and when Baby Yoda gets reunited with Papa Din Djarin. The adorable relationship between Mando and Baby Yoda is the heart and soul of The Mandalorian, so getting these two back together again is probably a much bigger deal for the future season than we realize.

That means Luke Skywalker might not actually appear that much in Mando Season 3. We already know that Luke probably didn't train Grogu before The Force Awakens, so the question is why? Perhaps Baby Yoda didn't want to be trained. Let's dissect.

Runaway baby — What if Baby Yoda just ditches Luke Skywalker in Season 3? We're not saying that Luke will be a bad teacher or a bad babysitter. But, much like Anakin Skywalker, Grogu has been separated from his parent, and that trauma will inform his entire Jedi education. But, unlike Anakin living in the Jedi Temple as a kid, Luke likely has a fairly informal set-up at this point in his Jedi-teacher days. If Grogu has been wielding the Force since the time that Anakin was born, then, it's possible his latent skills are more powerful than Luke's. This doesn't mean that Grogu is a more proficient Jedi or anything, but his raw power could allow him to slip away from Luke Skywalker long enough to find Mando.

Basically, the most interesting way to get Baby Yoda and Mando back together for Season 3 is to simply have Grogu escape from Luke.

It fixes "the Luke problem" — The producers and writers of The Mandalorian painted themselves into a corner bathed in the green light. If we're meant to think that the Mandalorian Season 2 is a cliffhanger that teases Grogu's Jedi training with Luke Skywalker, then it follows that Season 3 will have to feature more Luke Skywalker.

Assuming you were okay with the de-aged CGI Mark Hamill Luke in "The Rescue," do you really want to see more of that in Season 3? Objectively, even the fans who loved it have to admit on some level that it's distracting.

Just like Tarkin and Leia in Rogue One (or fake Sean Young in Blade Runner 2049) on some level, the audience will almost certainly grow a little tired of de-aged Luke if he appears in a bunch of scenes. This is nothing against Hamill or the process itself, it's just that like, you can't imagine Solo: A Star Wars Story with deep-fake versions Harrison Ford and Billy Dee Williams. Sure, people have put those videos online, but there's something inherently goofy and inauthentic about doing this for long periods of time. Bottom line: Unless Lucasfilm recasts young Luke, then they're going to limit the amount of time Luke appears on screen in Mando Season 3. Right?

For the 'gram — If Baby Yoda does run away from Luke in Mandalorian Season 3, this wouldn't mean that Luke wouldn't appear at all. It just means that the show could neatly set up a way for Luke to drop in one last time, in a less distracting manner.

Here's how it could go. Season 3 opens with Mando doing some King Mando business on the planet Mandalore. Bo-Katan is complaining about some anti-Mandalorian insurgents and dropping "dank farrik" way more than usual. Things are tough. Everybody needs a little bit of sunshine. Then, all of a sudden, Sasha Banks runs in and is like, "There's an urgent message coming in on a New Republic channel." Beat. "It's Luke Skywalker."

Then we cut to a holographic recording from Luke — aesthetically similar to the one he sent Jabba in Return of the Jedi. Luke tells Mando that Baby Yoda is missing, and that he believes "the Child is searching for his true family."

At that point, Season 3 of The Mandalorian could solve the Luke issue and set up some urgency to the plot right away. Obviously, what the Lucasfilm powers-that-be have in mind could be totally different, but right now, considering how many balls The Mandalorian has floating in the air, this feels like the fastest way to make everyone happy. The only real question is, how long will it take for Baby Yoda and Mando to be reunited? And, when it does happen, what happens after that?

The Mandalorian Season 3 is expected to air sometime in 2022.